After a thoroughly enjoyable game of second edition 'Epic - Space Marine' with my best mate last weekend I have suddenly had my interest in 6mm toy soldiers reinvigorated once again! In truth it has been a while since I've worked on any Epic models (3 years since BOYL/ Oldhammer Day 2014 as it goes) so I was quite excited to get back on the micro warrior bandwagon once again. 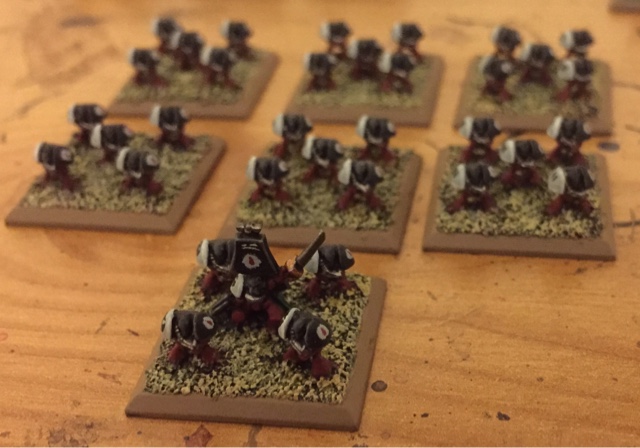 First up I decided to complete my Veteran Company of Flesh Tearers by painting up one final 'six-stand detachment' and a company command stand. As the majority of this Veteran Company (including the two previously completed detachments) will be mounted in Thunderhawks for increased mobility I only need to pain up one Rhino for the command unit (more on this later).

Next I decided to go for an assault detachment that I had assembled and undercoated way back in 2014. Given the fearsome, blood thirsty reputation of these descendants of Sanguinius it makes sense to make this force relatively melee heavy... So I might do a few more assault stands at some point in the future to push this up to a full assault company. 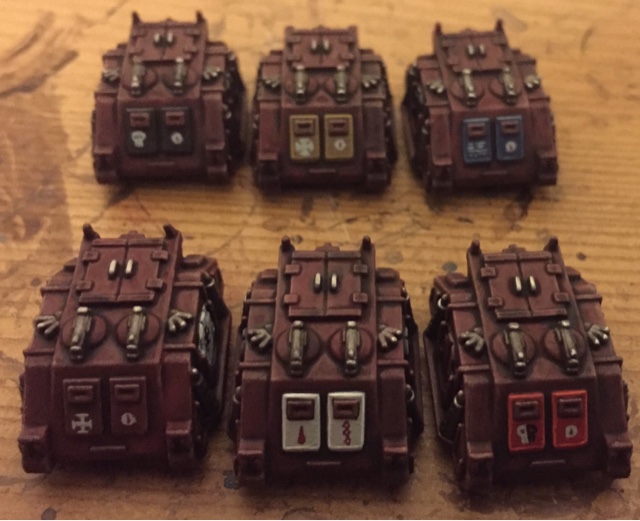 I needed to paint a Rhino for the Veteran Company command stand that I mentioned earlier, so I thought I might as well make the most of this and do a few more vehicles at the same time.

As I'm probably going a to do a load of the 'Special Units' next I though I might as well do their transports first. Here we have the transport vehicles for an Apothecary (white), Techmarine (Red), Librarian (Blue), Chaplain (Black) and Chapter Master (Yellow). As these will be the transports of Soecual Characters I decided to spend a bit more time on these vehicles and so I painted specific role-related symbology on the frontal armour of the APCs.

I also had a couple of unpainted Land Raiders close to hand and so I gave these guys a quick paint job to; again each of these models was painted with bespoke symbology. 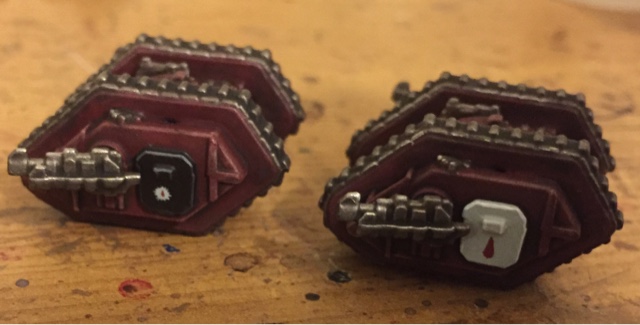 I thoroughly enjoyed painting these models up and they are really rewarding (and quick) to knock out, they also make a nice, refreshing change from the 28mm Primaris Marines that I've been working on recently. I genuinely can't wait to get these troops deployed on the table soon!

Next up I'm going to try and do some more 6mm infantry to bolster my Flesh Tearer force... Possibly the Special Stands that I now have transports for.

Posted by LegioCustodes at 13:37