It's been a while since I did anything Fallout related so I thought I would get back on the band wagon by painting up some Brotherhood of Steel Knights in Combat Armour to support my Power Armoured Paladins.

Now I know most people associate BoS Knights with Power Armour (particularly those gamers who were only introduced to the franchise by Fallout 3 or Fallout: New Vegas) but there is a strong precedent for Knights clad in Combat Armour. In fact in Fallout 1 all of the Knights situated in the Lost Hills bunker wore Combat Armour whilst only Paladins were given the honour of wearing suits of T-51b Powered Infantry Armour.

The latest game in the series (Fallout 4) has gone back to these classic roots and now we frequently see Brotherhood soldiers wandering the wasteland dressed in Combat Armour... However it's appearance has been substantially altered compared to that seen in the Lost Hills Bunker back in 1997.

One thing Bethesda did do in this installment of the universe was to create a new Brotherhood uniform for the Knights to wear under their Combat Armour; strangely however they chose to colour this garment orange. Originally I had my misgivings about this unique colouration as I didn't feel that it was very militaristic... however over time it has grown on me and now I'm rather partial to it.

In addition to the orange undergarment you'll be pleased to hear that faction specific Brotherhood Combat Armour is also available and this has a rusted metal appearance supplemented with leather straps and the BoS symbol emblazoned on the chest.


I decided to stick with this new colour scheme when I painted my own Brotherhood of Steel Knights and so set about the unthankful task of applying many, many layers of orange over the cloth areas of my models.

This is actually quite time consuming as the pigment in orange paint is notably weak (only surpassed by yellow in it's lack of pigmentation) and so it took quite a few layers to build up a decent rich colour.

Nonetheless I think the results were worth the effort and the final shade adheres very closely to the uniform seen on screen. 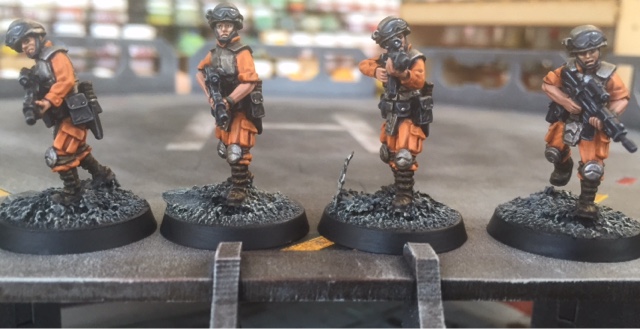 Meanwhile the metalwork was given a few washes of Agrax Earthshade to give it a slightly rusted appearance in line with the screenshots from the game.

It took me a few weeks of scouring the internet to source appropriate models for the job, but eventually I settled on the 'White Ops' range from Hasslefree Miniatures. These guys fitted the bill perfectly, even down to the lamp/camera on their helmets and so I ordered a bundle of them for the task.

The models come in a selection of poses with assorted support weapons and leaders available to further bulk out the force. The sculpts are clean and crisp with a good level of character for such little guys, I found them to be really enjoyable to paint. 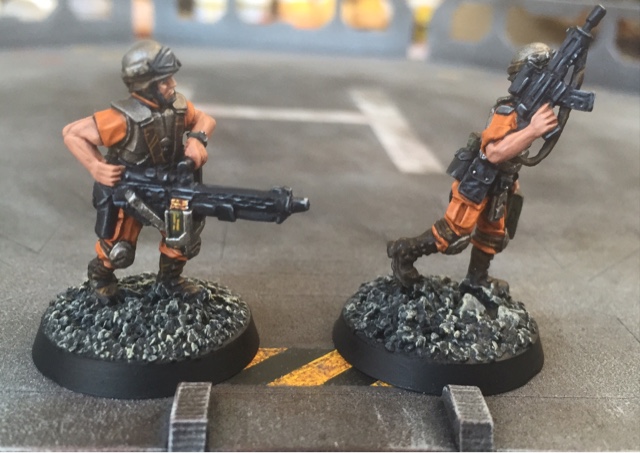 I am really happy with how these Steel Knights turned out and I feel that they capture the look of the in-game characters almost perfectly, it is almost like the models were made to fill this role. I am also pleased with how my first attempt at orange fabric has turned out!

Now that I've painted these minis I have been bitten by the Fallout bug once again and so I have already started on my next project... a five man squad of NCR Patrol Rangers to boost my girlfriend's growing New California Republic skirmish force!
Posted by LegioCustodes at 10:41