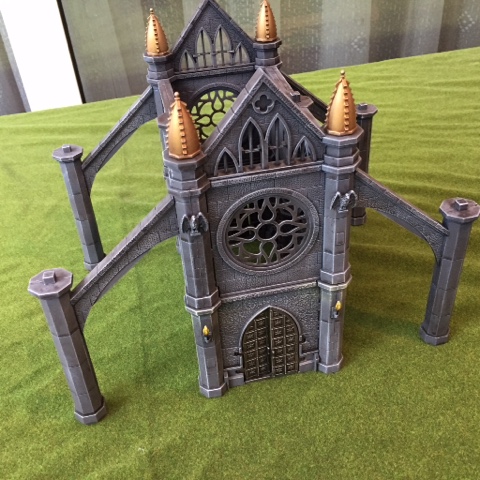 
I bought three of the kits in total: one large Gothic building and two small Gothic building variants, all of which look substantially different to their counterparts but with enough degree of similarity to visually tie them together cohesively on the tabletop. 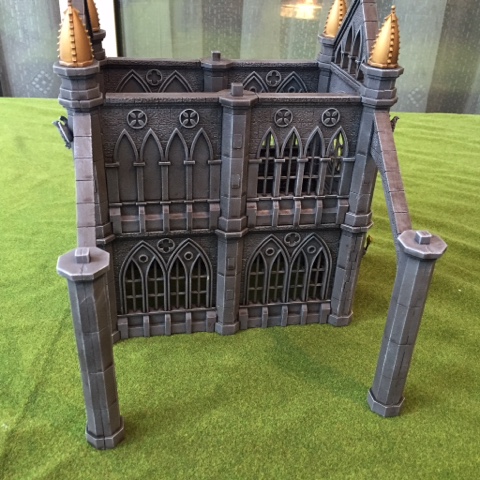 The kits are entirely modular and multiple sets can be combined in order to provide infinite design options, thus no two buildings ever need look identical and you can populate and entire battlefield with an assortment of interesting structures. 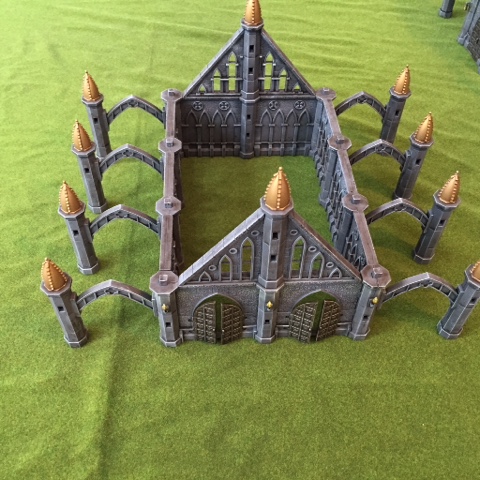 The buildings look great and are far, far easier to construct than Games Workshop's comparable range of scenery, additionally they are very durable and chunky sculpts which is something that appeals to me both as a modeler and as a painter.


The kits also come with a nice selection of additional little touches such as an assortment of torches, lanterns and gargoyles that can be used to decorate the walls of the structures. 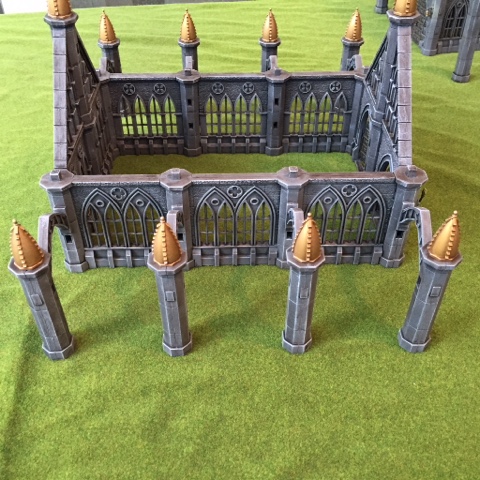 The only real drawback with these models is that there are no internal floors, so even if a building appears to be a two-story structure from the outside this wont be represented internally...but this is only a minor niggle that doesn't detract too much from the overall quality of the kits. 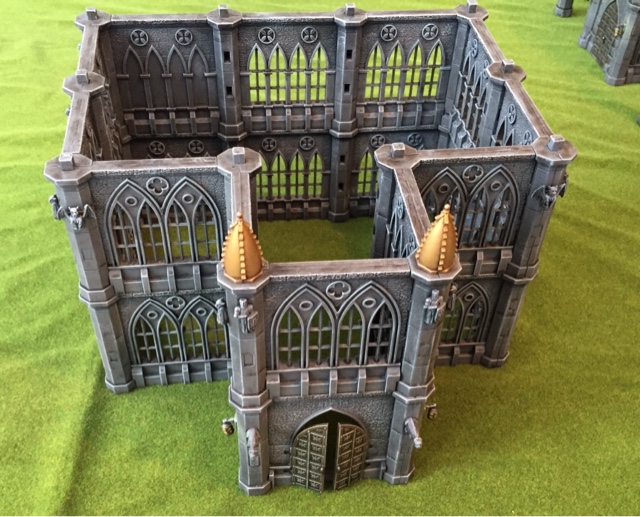 I painted the models with my standard black undercoat followed by a second spray undercoat of Army Painter's Uniform Grey which provides a solid base coat to work on. I then washed the whole model with a copious amount of GW Agrax Earthshade (this project took three whole bottles of the stuff), I took great care to work this wash into every  nook and cranny as any omissions stand out like a sore thumb when the model is complete.

Once the washes were completely dry I then drybrushed all the stone areas with GW Long Beard Grey (Dry), this was a tedious task but made a lot easier by Citadel's fantastic Dry range of paints. The doors were then rewashed with multiple layers of Agrax Earthshade and GW Seraphim Sepia before a final drybrush with GW Terminatus Stone (Dry). The lanterns and torches were given a progressive series of yellow and orange washes with a final white drybrush whilst the metal areas were painted with GW Leadbelcher, washed with Agrax Earthshade and highlighted with GW Mithril Silver.

For the spires I wanted the opportunity to add a bit of variation to the models overall appearance and so I decided to paint them gold in emulation of medieval churches and minarets. I achieved this by spraying the spires with GW's new Retributor Gold (it's literally amazing...my girlfriend bought me this spray as a gift and it has been a life changing experience; painting gold has never been so easy), one coat is enough as the paint has such great coverage. This was then washed with a liberal amount of Seraphim Sepia, followed by two drybrushes, one of GW Sigmarite and a second lighter coat of GW Necron Compound.


I have never dabbled in object source lighting (OSL) effects before but for this project I though I would give it a go around the lanterns and torches adorning the walls of the buildings. I achieved this by a light drybrush of GW Hexos Palesun around the areas where these light sources would generate a significant level of illumination. These look pretty good in reality but haven't come out so well in the photos. However if you look closely you can see the effect. 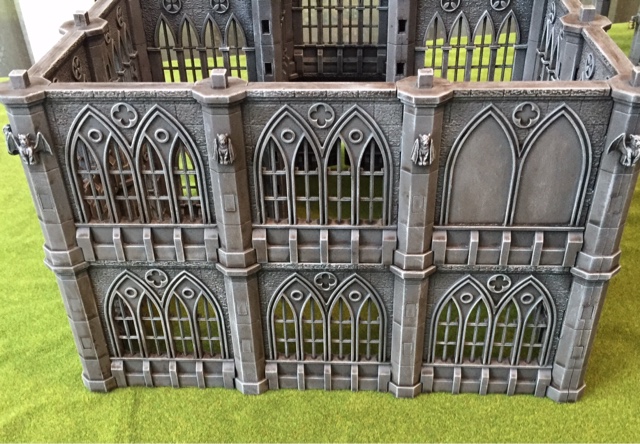 Overall these Pegasus models are really great kits and I have to say I am really happy with them, also they are truly multipurpose, their generic Gothic design means they would fit equally well on the battlefields of the 31st/41st Millenium, the townships of the Old World or even in the chilly city of Frostgrave. Another key selling point is that these kits are considerably cheaper than their equivalents from GW, which is always good news. 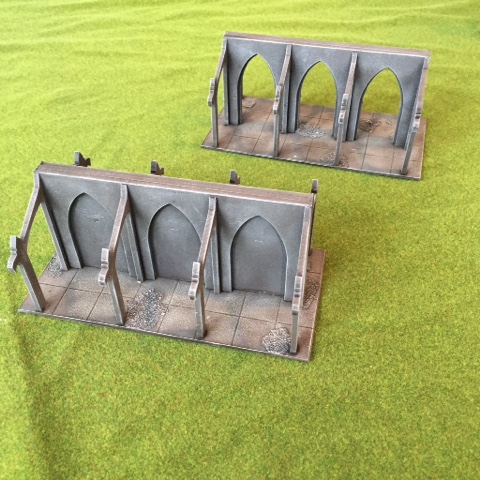 Whilst I was making this terrain I decided to take the opportunity to assemble and paint some MDF scenery that I had lying around in my man cave for some months. I have never used MDF terrain before and have always looked at it as a bit of a 'cheapy' option; however I thought now was the time to give it a go and so assembled a few Gothic wall pieces. Once they were assembled using PVA glue I painted them using the same steps described above. I have to admit I am really impressed with how they turned out, once the paint has gone on they are nearly indistinguishable from their plastic peers. 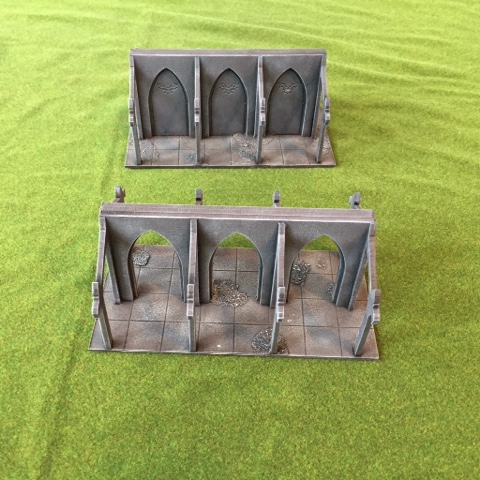 Looking at these Gothic walls I think I can easily fit them into the 'Sororitas Compound' theme by arranging them so that they look like the two opposing ends of a boltgun firing range (essentially the firing point and the butts respectively). This is ideal as the Gothic style is entirely 40k, but the fiting range is entirely suitable for an active military installation. 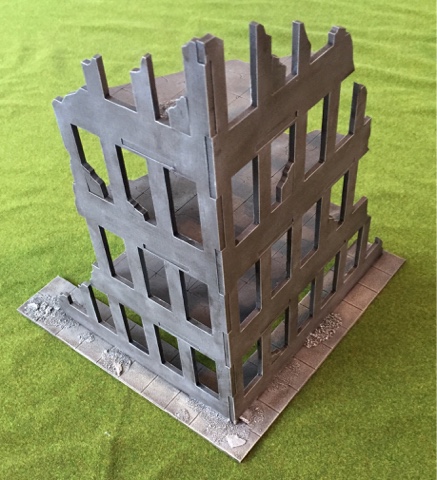 I also had an MDF ruined skyscraper that my mate gave me when he decided that he couldn't be arsed to fiddle around with laser-cut wood and PVA glue. As I had the PVA mixed up I decided I might as well use it to get this scenery behemoth constructed...I can confirm it was indeed a bit fiddly, but after some swearing and very sticky fingers I managed to get the damned thing assembled and based it on an old citadel movement tray. 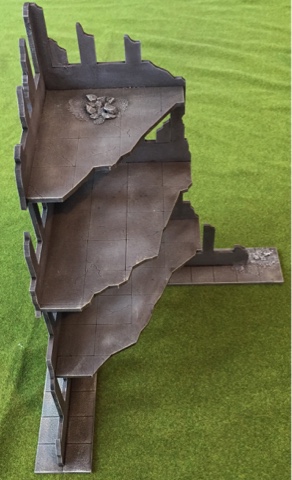 I have to say after this project I am a definite MDF convert, it is a great resource that I wish I'd looked at years ago.  Admittedly the results aren't quite as good as those provided by highly detailed plastic kits, however at less than a quarter of the price this is a reasonable compromise which can easily be mitigated by combining a mixture of plastic and MDF scenery on the same battlefield.

Well that's it for this post, I'll let you know how these new scenery additions cope in my next game!
Posted by LegioCustodes at 17:43