Over the weekend my girlfriend kindly agreed to endure another game of 40k with me so that I could get some lead on the table! Again we used the new seventh edition rules and the game confirmed what I had found initially in my inaugural battle report...these rules are pretty good and capture a happy medium somewhere between second edition and sixth....it's fluid to play but diverse enough to allow a bit of RPG character back into the system! 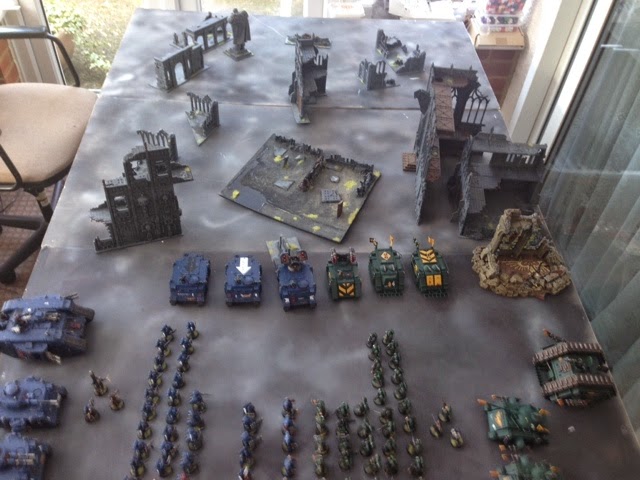 Again my girlfriend commanded the stoic Crimson Fists led by the beautiful inquisitor Athena, whilst I fielded my Rogue Trader Salamander force (complete with my new [old] whirlwind). The Salamanders were also led by an Inquisitor who in this case was represented by a suitably retro 1980s Imperial Army Commissar. The forces were evenly balanced with a lot of armour on each side (1 Land Raider, 2 Predators, 1 Whirlwind & 2 Rhinos each to be precise).

Athena won the roll off and took the first turn, but failed to do much damage despite accurate shooting from her assorted heavy weapons. After weathering the hail of laser fire my noble Salamanders wiped the dust from their dark green armour, pulled their weapons into their shoulders and unleashed hell.

After a couple of turns of shooting all of the Crimson Fists heavy armour had been entirely eliminated in  balls of incandescent flame, their crews cooking inside the now useless metal coffins.

As their tanks were being vaporised by my warriors the Fists infantry recoiled in horror as five hulking warriors in archaic tactical dreadnought armour materialised within their battle space; wrenching a key objective from their control. This caused the sons of Rogal Dorn to have to adapt their own battle plan, and thus their own strike force of terminators were forced to redeploy back into their set-up area  in order to prevent my veterans from running amok unchallenged.

Whilst the terminators engaged each other my now dominant armoured column rolled forward unopposed firing indiscriminately as the vehicles heavy tracks churned the city 's streets into rubble... 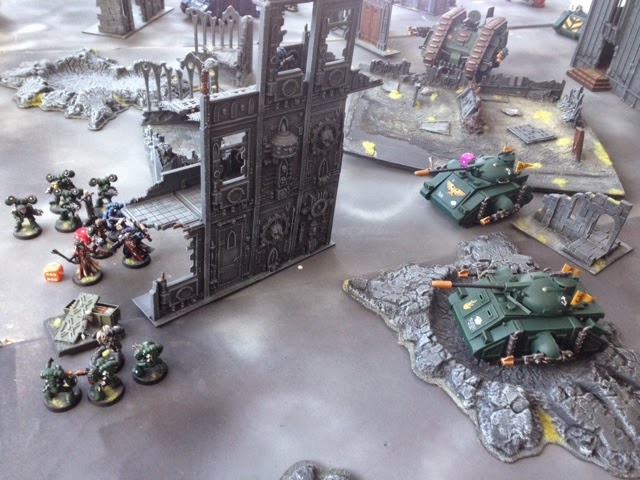 It was a glorious sight to see these thirty year old tanks moving forward as the whirlwind provided covering fire. Despite only being Str 5 AP4 the whirlwind gave a good account of itself (as did it's enemy counterpart).

Meanwhile both forces utilised a number of fast-moving mechanised infantry squads in rhinos to try and creep around the flanks in order to ambush and butcher their opposite numbers. 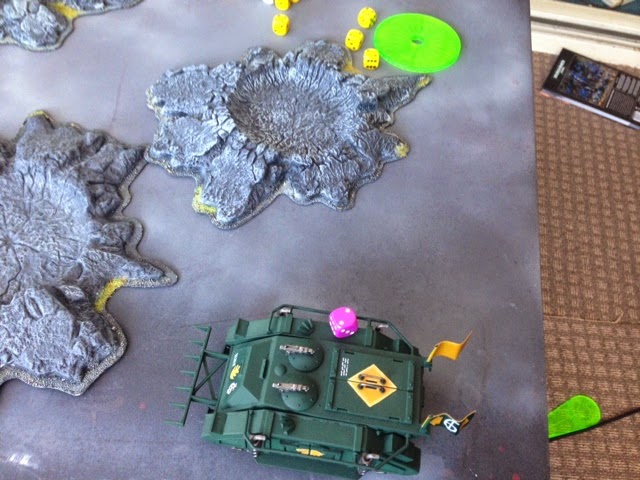 Eventually these flanking forces came into contact with each other and so the Astartes disembarked and a series of brutal short-range firefights ensued, which were inevitably followed by even more brutal melees.... 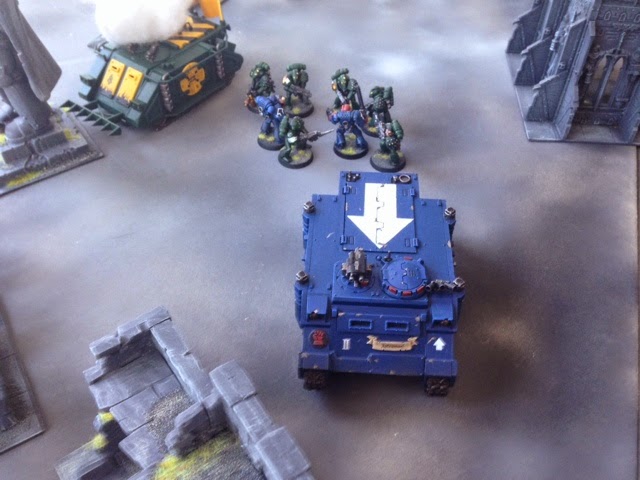 Inevitably the glorious survivors of these close combats would emerge covered in blood and shouting their cheers of victory to the God Emperor... Only to then be gunned down by assorted devastator squads that had holed up in the dominating terrain features. 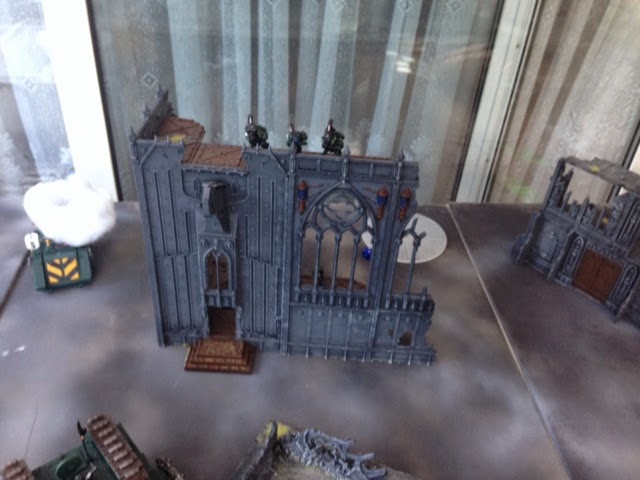 In the end the final outcome was determined by a vicious close combat that took place around the Salamanders objective. This combat was initially fought by the aforementioned Terminators, but after they had successfully butchered each other both sides started to funnel more and more troops into the meat grinder. By the end of the game every commander (from both sides) and vast quantity of grunts were kicking the shit out of each other in a giant punch up.... 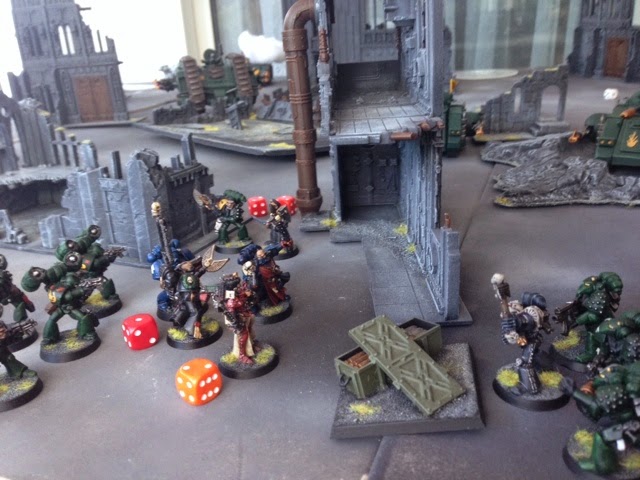 With all to play for we prayed to our gods and the dice were rolled... 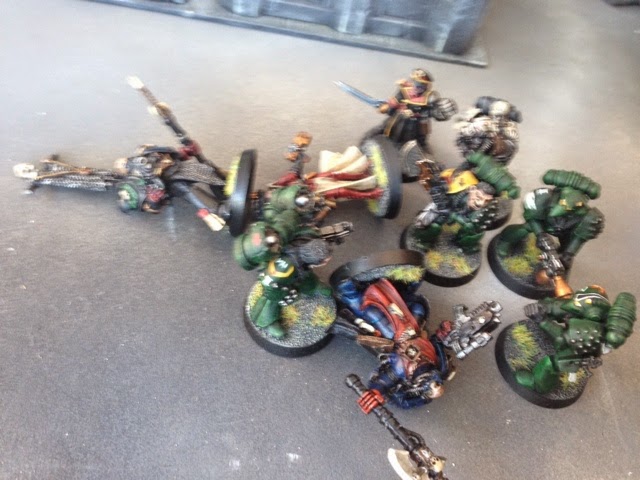 And alas Inquisitor Athena and her brave Crimson Fist allies were slaughtered to a man. I was shocked...for the first time ever it seemed that I had actually won a victory against my girlfriend! I tallied up the victory points and discovered that the final result was indeed 6:1 to me. I wish I could say it was down to some great tactics on my part, or maybe a moment of Napoleon-esque genius, but it was more likely down to some fortunate dice rolls on my part and a little bad luck on hers. I feel the hand of the fickle Gods of Chaos may have been on my side....perhaps the time has come to sell my soul...I could be the new Warmaster....hmmmm

Again the game was fun; the rules worked well and things moved fluidly. There was the right level of depth for the game to be characterful without getting bogged down...After all we had a total of twelve vehicles on the table and I could easily keep track of their varying states of disrepair ... In second edition this would have required enough book keeping to induce a brain tumour...whilst in third/fourth/fifth the tanks would have all been destroyed by one lucky shot; like I said....a happy medium!!

I am already salivating at the prospect of the next game!!!!

Posted by LegioCustodes at 12:10