Greetings all! Once again there has been an unavoidable delay between posts; sadly some issues in my personal life and a busy workload has interfered with my blogging activity! However I have had some time over the weekend so I thought I would get back on it with a battle report.
This was a fairly simple game of second edition 40k using my Crimson Fists (led by my wonderful girlfriend) fighting against my brutal Flesh Tearers (more on these guys later). To keep things simple I drew up identical armies from the Black Codex. These consisted of a Captain in power armour with a chainsword and bolt pistol; a terminator squad with an assault cannon; a tactical squad and a half assault squad. It had been a while since we played with these rules so I thought it was best to keep things fairly basic.
In the spirit of retro second edition gaming I set up a battlefield using the original card ruins; a green gaming mat and some old school lichen. With the war zone established we drew our mission cards from the deck: 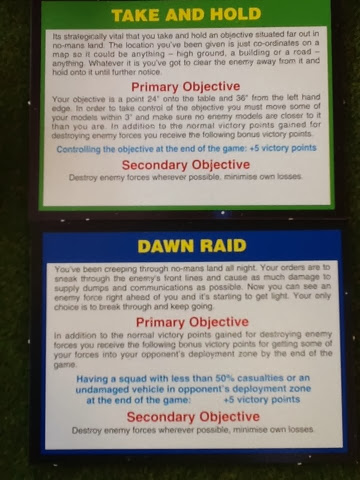 My missus and her blue clad warriors drew "TAKE AND HOLD" and so were required to seize an objective (in this case an ammo canister) in the centre if the table. I on the other hand drew "DAWN RAID" which meant my men needed to penetrate the Crimson Fist deployment zone. If we achieved our goals then we would gain an additional 5 VPs on top of those awarded for slaughtering enemy squads.
We set up our troops on the table within our deployment zones. Both of us split the tactical squads so we could get the missile launchers on the high ground whilst freeing up our sergeants and special weapons troopers to sprint for victory. The majority of our armies hid in the available cover which was plentiful. 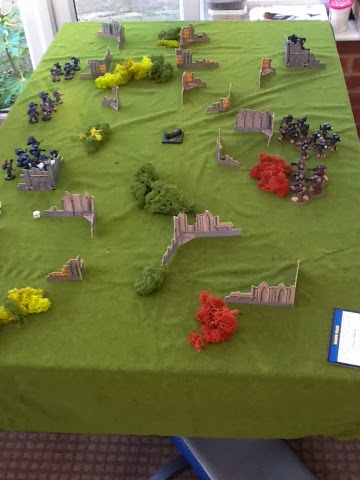 Given that we were using a slightly smaller table than usual (I couldn't be arsed to dig my games table out of the shed) our troops were grouped a little closer to together than one would expect). 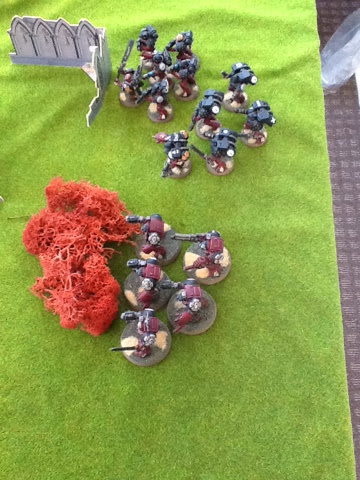 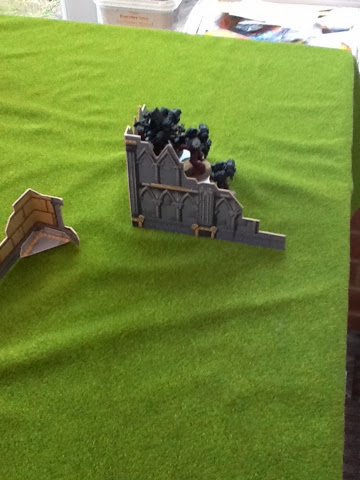 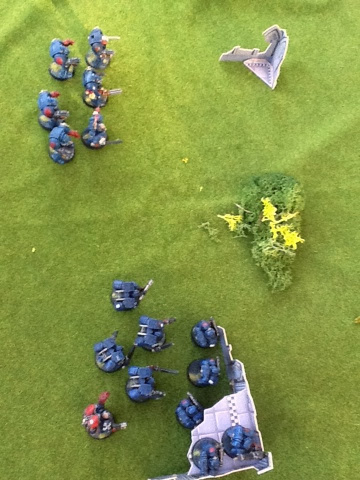 The Fists took the first turn and set straight about achieving their primary mission. The combat squad with the missile launcher stayed firm in the high ruins so they could use their heavy firepower whilst the remainder of their unit started running through the overgrown ruins on the left of the battlefield. The terminators moved forward more slowly so that they could use their heavy weaponry to maximum effect; the Captain decided to join them. On the right of the battlefield the assault marines jogged forward rather than igniting their somewhat unpredictable jump packs.
Once the movement phase was over the sons of Rogal Dorn let rip with bolters; assault cannons and missile launchers.... And this volley of lead was devastating.... 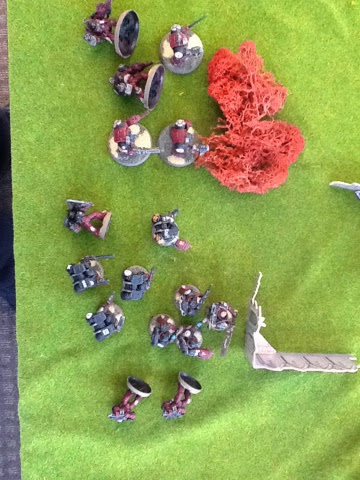 When the cloud of cordite lifted the Sons of Sanguinius had taking heavy casualties with two tactical marines and one assault marine lying dead on the floor; their power armour shredded to pieces. More worryingly two of the veteran terminators had also been slain; their near impervious armour apparently not as resilient as they had hoped. The remaining terminators then embarrassed their chapter further by failing their leadership test and soiling themselves. Luckily Space Marines are tougher than the average Joe and instead of breaking they become shaken instead. 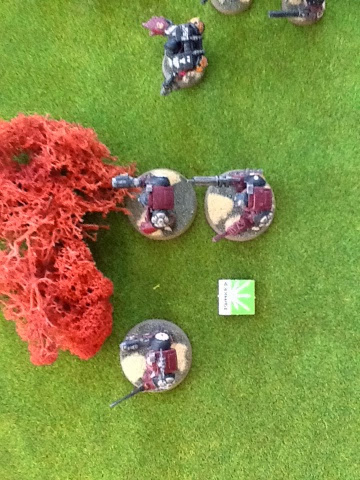 Following that round of butchery the crimson clad angels were ready for retribution. Bearing in mind their objectives the majority of the battle-brothers set forth across the board; though the heavy weapons team remained in place to shoot and unfortunately the shaken terminators could not move towards the enemy so remained in situ.
The assault marines decided to engage their enemy counterparts and so fired up their jump packs powering 18" across the battlefield. Luckily there was only a little bit of scattering, and they were able to use their additional 4" move to successfully engage. The shooting phase was disastrous and no fists fell to the combined firepower. The assault phase was a little better and the Crimson Fists Sergeant screamed in agony as the whirring blades of a chainsaw churned his enhanced organs into offal. 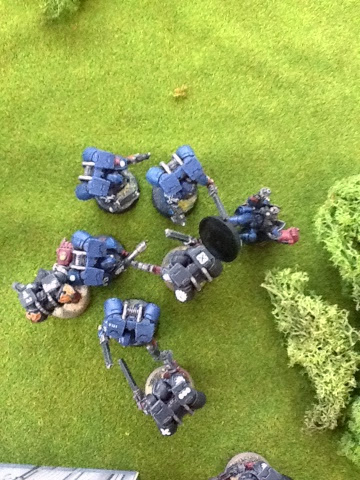 All that was left was for my terminators to rally; which they did; and then it was back to the fists for turn two.
Unsurprisingly the heavy weapons fire team remain in place while the terminators and the tactical marines continue to move towards their objective. Once again the scions of the Imperial Fists Legion prove their skill at arms; cutting down three tactical marines from the missile launcher squad and another terminator; whose squad mates again become shaken!!!!! Pahlavi; pussies!! 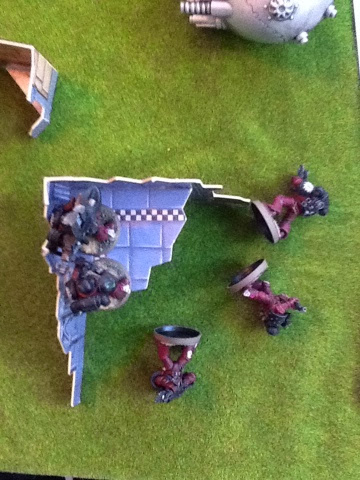 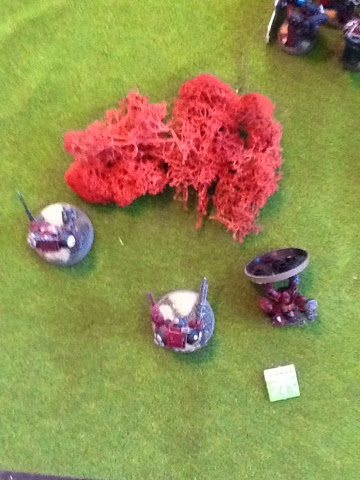 However in the ongoing melee the Flesh Tearers live up to their fearsome reputation; pulling a blue marine apart with their bare hands and drinking deep of his precious vitae! 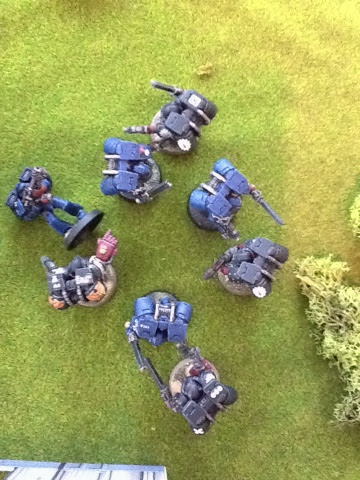 The depleted Flesh Tearers realise that they face defeat and so start to take measures to try and regain the initiative; moving forwards and firing their weapons from the hips..... Again to no avail! Missiles spiral off the battlefield; special weapons jam and bolters do little more than damage the paintwork on the cardboard ruins. I'm not going to lie.... I wailed in rage at this point. Subsequently the melee results in two flesh Tearers dying for the loss of another fist. 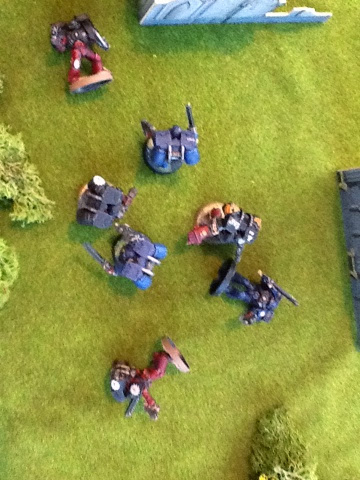 The terminators once again rally and recover from their shaken state of mind.
Turn three starts with the Crimson Fist Terminators; led by the Captain sprinting to their objective and seizing it, forming a ring of ceramite all around it. Meanwhile the Flesh Tearers Captain, and his entourage take a volley of firepower in the face leaving one of their number dead on the floor: 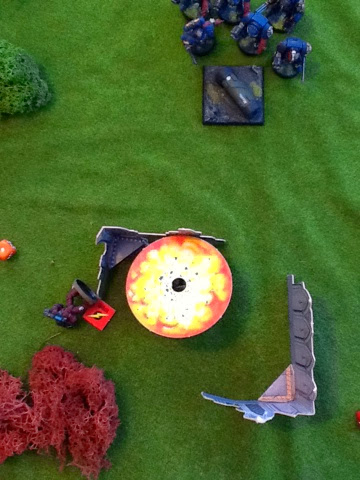 The eternal melee continues unabated and another Flesh Tearer is shredded on a Crimson Fist's sword. 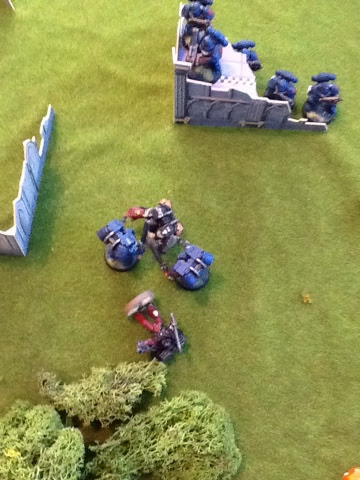 The Flesh Tearers terminators are now able to move forward for the first time in the battle and so move into an appropriate firing position so that they are able to shoot the tide of blue holding the centre objective; the two tactical units hold position; cock their weapons and add their firepower to this fusillade. 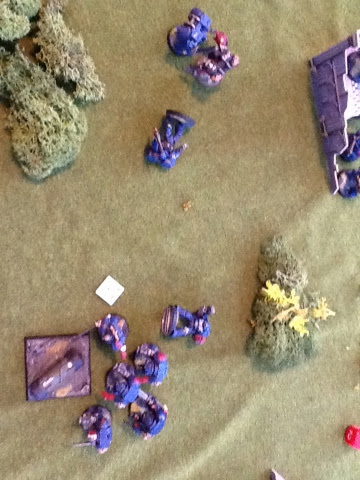 One blue terminator finally succumbs to the sea of bullets; falling to his knees as centuries of loyal service are rewarded with ignominious death. The Captain also takes a wound; but staggers onwards. Meanwhile the melee still fails to end; and the Flesh Tearers Sergeant pulverises one of the remaining Crimson Fist Assault Marines with his oversized power fist.
With the conclusion of turn three we decided to end the game and so tallied up the victory points....
Once again I had been defeated (heavily defeated) by my wonderful girlfriend!! It was a strong victory and I have to congratulate her on a really well played game!
Overall this game was really enjoyable; I have been playing a lot of sixth edition recently so this was a little clunky as I had to remind myself of the rules at various points; but once I got into it things can to mover more quickly! I am looking forward to our next game!! Hopefully I might win....or at least draw!!
Posted by LegioCustodes at 10:50