I recently managed to get a fairly decent sized game of eighth edition 40k in with my mate. A key feature of this latest version of the game is that it is suitable for accommodating larger size games with relative ease due to the wonderful simplicity of the rules. 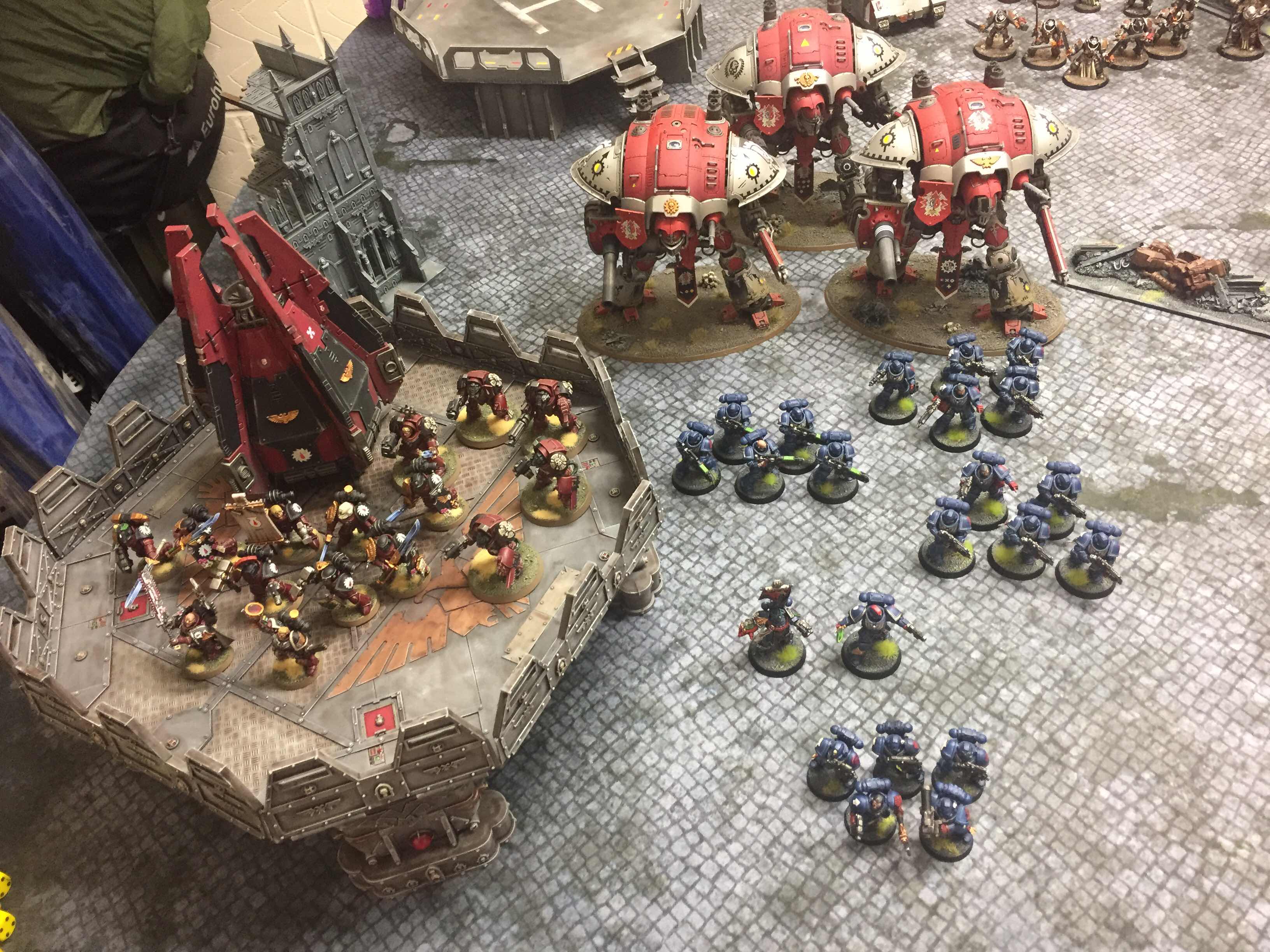 For my force I decided to draw elements from each of my various Imperial armies in order to allow them to play to their strengths and provide support to each other in a combined-arms approach.

My heavy hitters in this army were three Questoris Pattern Imperial Knights; I have to admit that I really love these guys and I rarely get to field them so this was a real joy.

For dedicated fire support I deployed my Crimson Fists (led by Pedro Kantor) and for close assault duties I utilised a potent detachment of Flesh Tearers commanded by the terrifying monster that is Gabriel Seth - That’s correct; two Chapter Masters in the field! 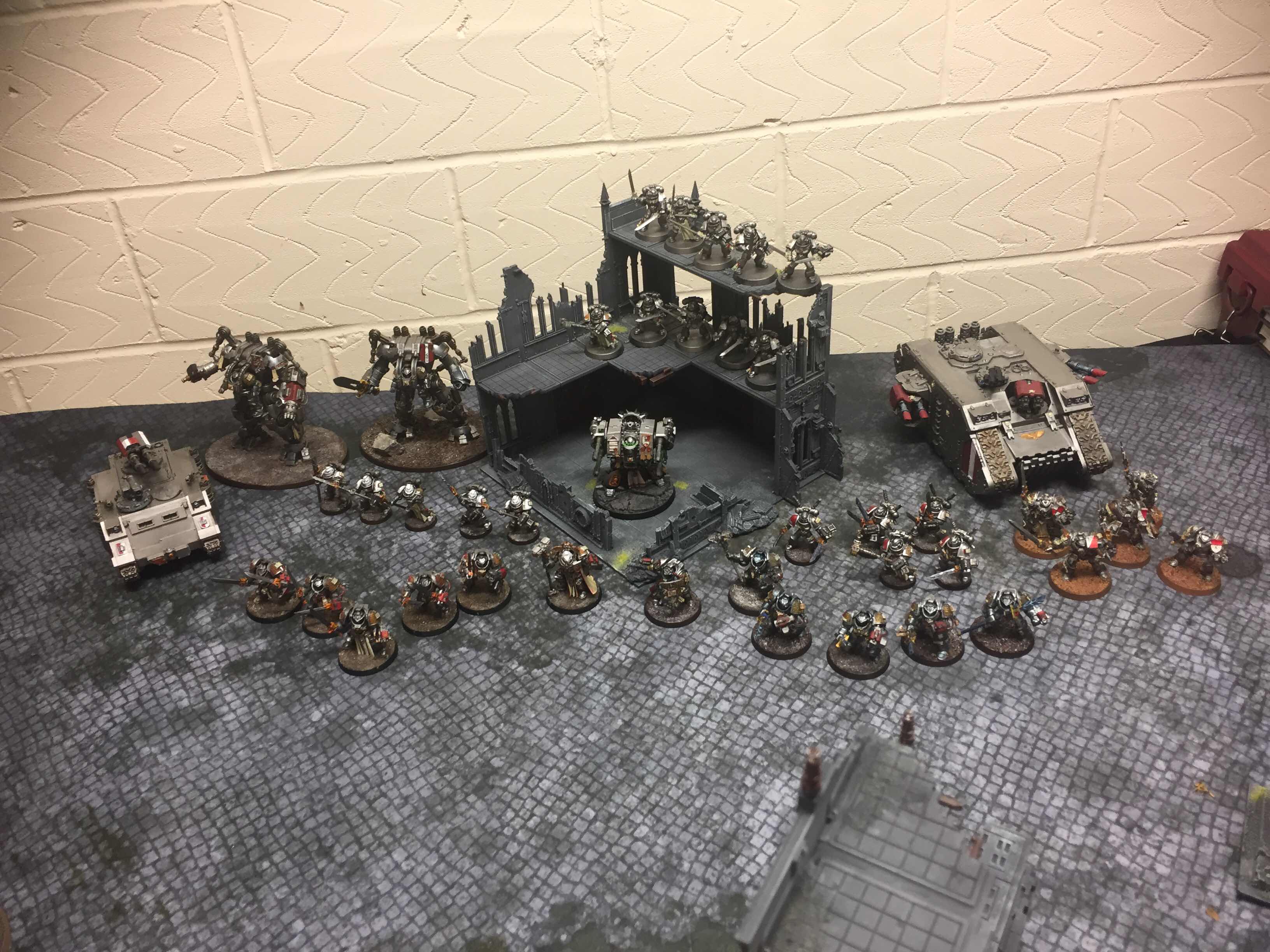 The Grey Knights were led by their own Chapter Master in the form of Kaldor Draigo... who is probably one of the most powerful characters in the game. He was supported by a couple of Grand Masters in Dreadknights and Grand Master Voldus... that’s a horrifying amount of psychic power!! 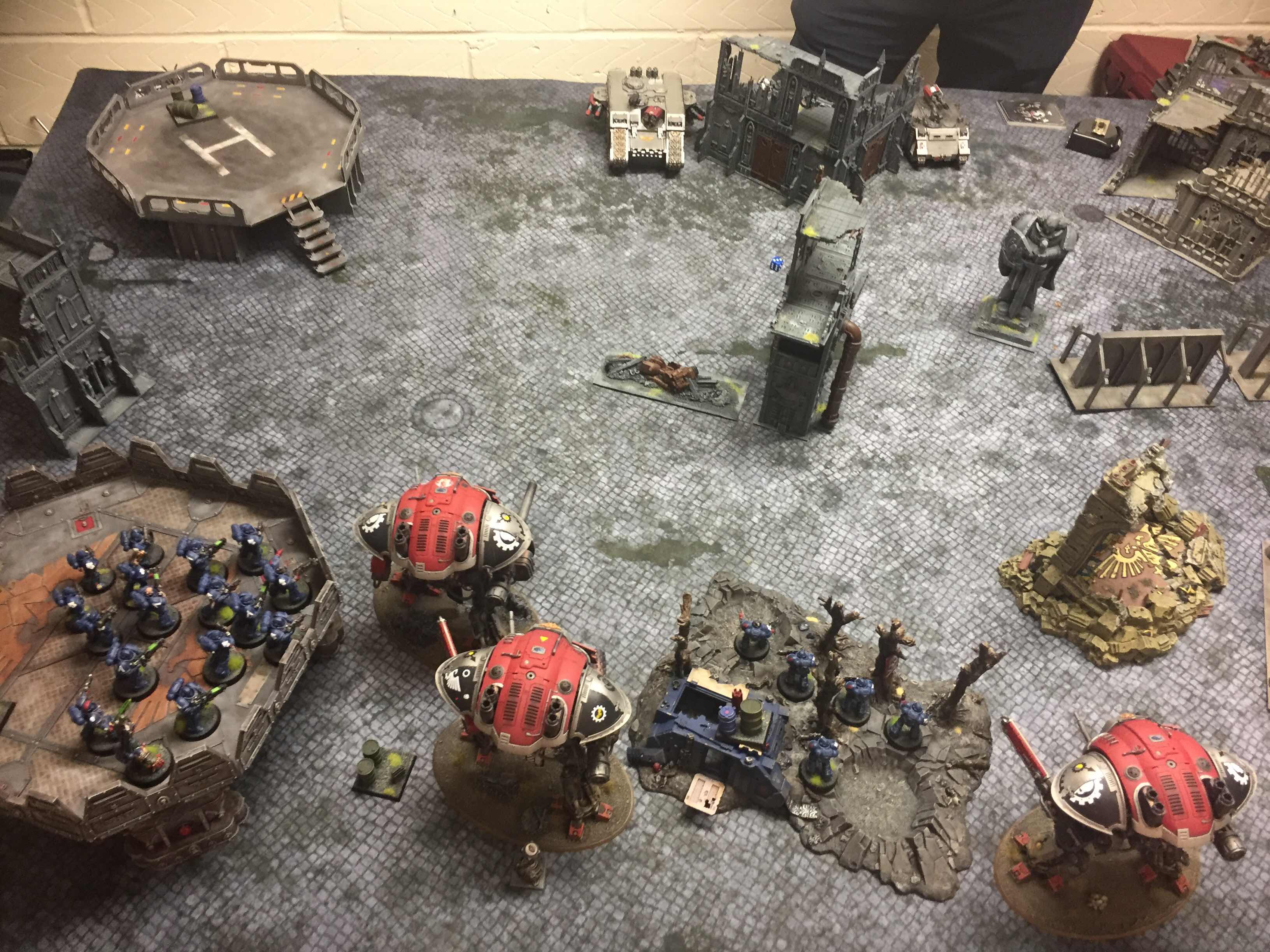 The mission we selected for this game was based on capturing objectives...and so I took the opportunity to place my objectives as close to each other as I could in order to allow me to better cover them with my units. I then deployed my Crimson Fists and my Imperial Knights around these objectives in order to establish an impenetrable iron wall of death.

I kept my Flesh Tearers in reserve so that I could maximise their melee skills and objective grabbing talents later in the game! (Oh the joy of a well-timed deep-strike!) 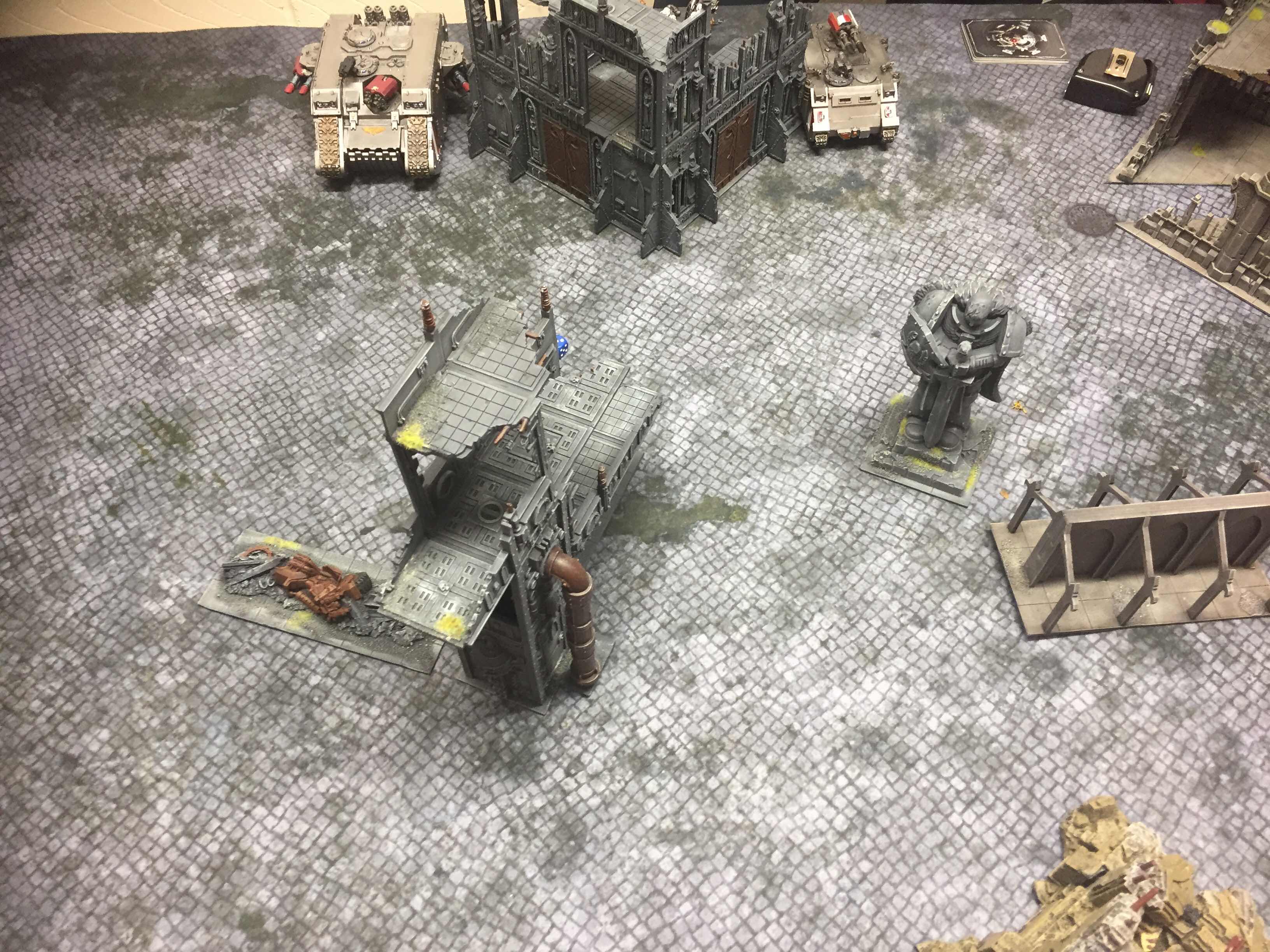 The Grey Knights are a force that is based predominantly around deep-striking tactics and so for this battle not many of these giant silver warriors were actually set up on the table. Instead they were situated far above the planet on the teleportation array of their mighty Strike Cruiser... waiting for the most opportune moment in which to strike! 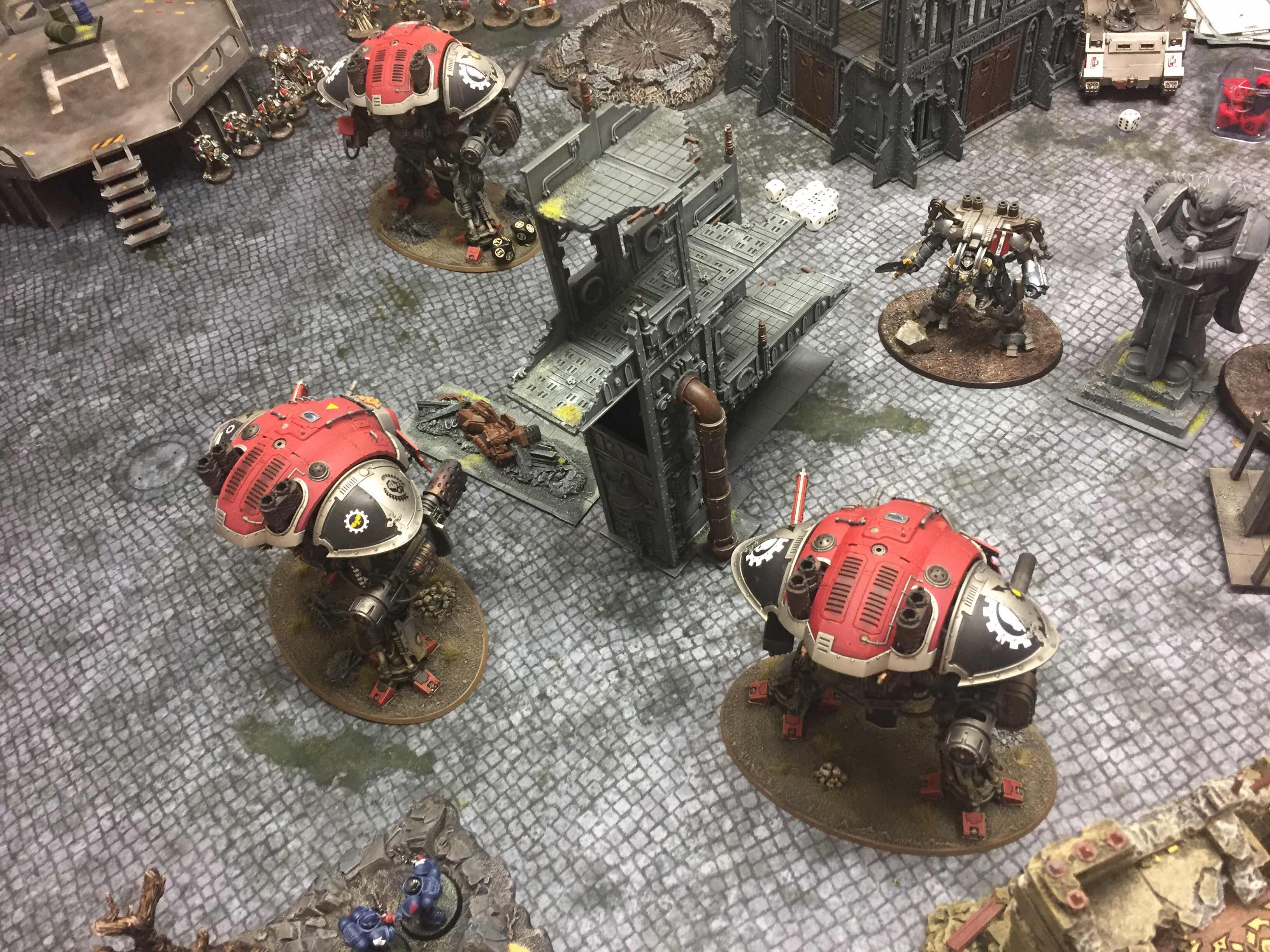 Looking to seize the initiative early on my three Imperial Knights stormed forward on turn one in order to really put pressure on the Grey Knights. I also decided to use a lot of my Command Points on assorted strategums in turn one in order to enhance their performance as soon as possible in the battle. 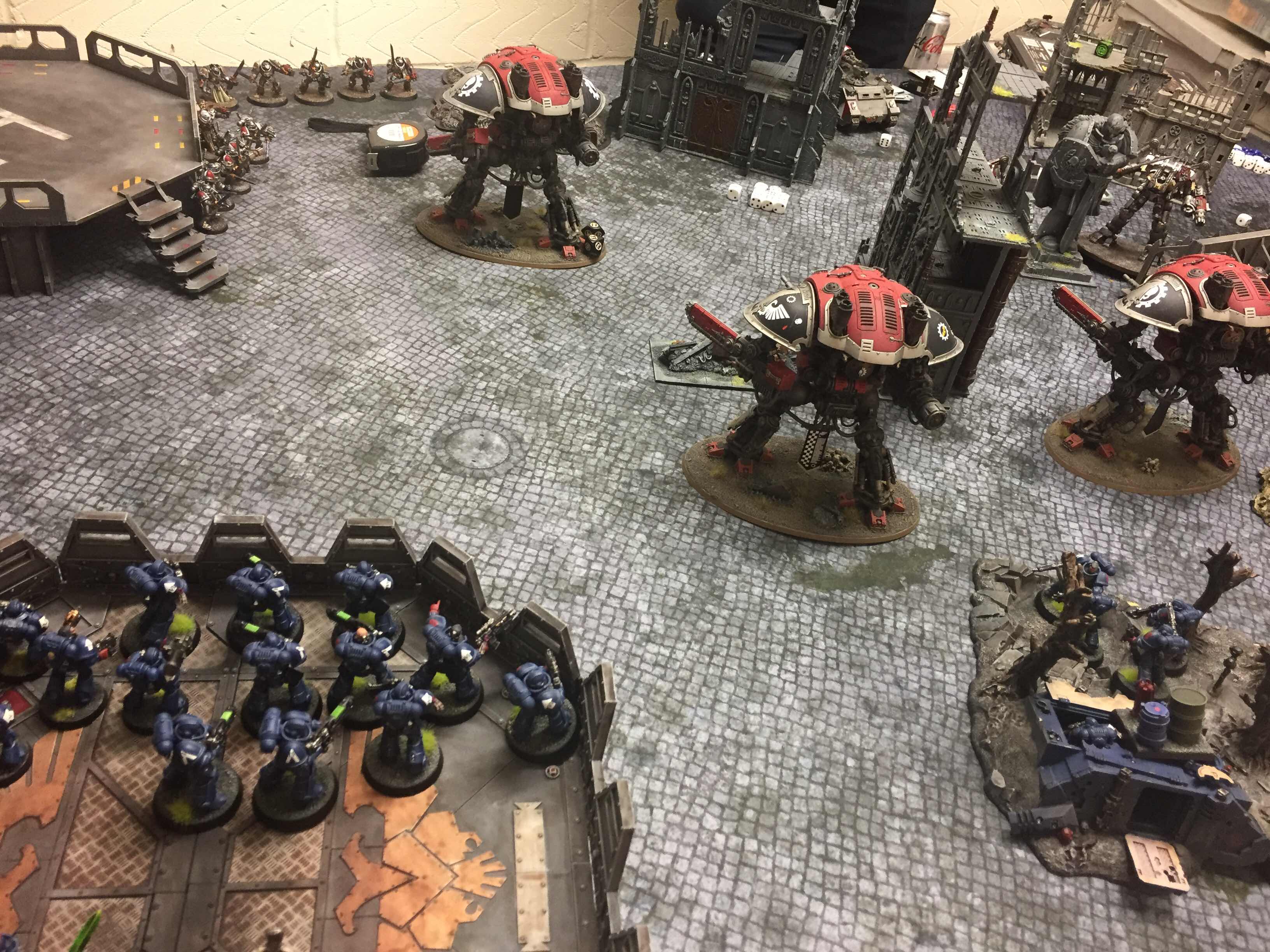 This brutal tactic had the desired effect and the Grey Knights were forced to respond and deep strike some of their reserve units into their own table area in order to defend against my aggressive assault. 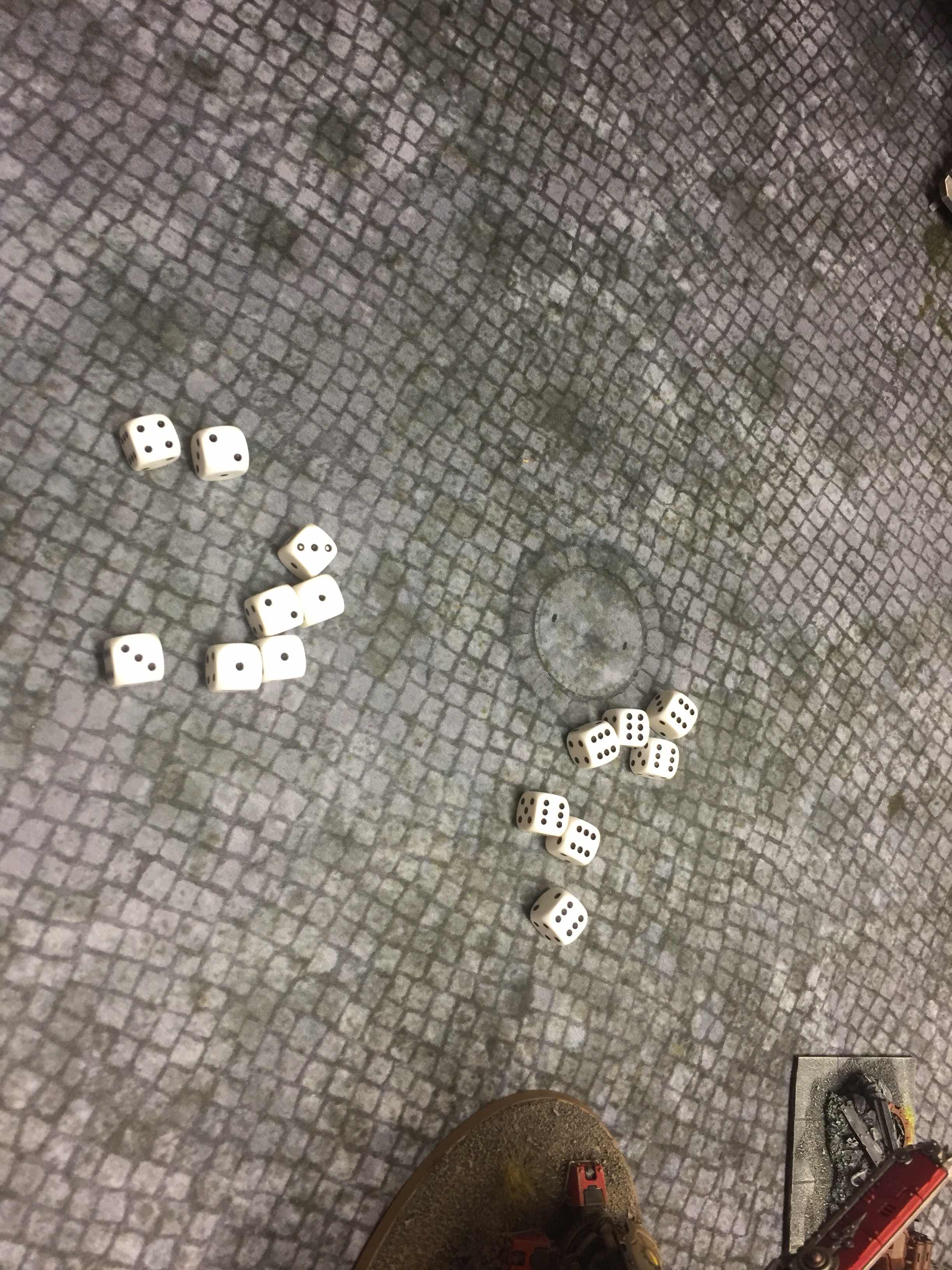 My mighty Imperial Knights are drawn from the nobles of House Taranis who have a Special Rule which allows them to roll a D6 for any wound they sustain; and on a 6 these wounds are ignored... this is a nice touch but usually it is not a massive boon.

However after a particularly focussed round of shooting from the Grey Knights my opponent was nearly sick in his mouth when I made the above dice rolls.. that’s right I rolled seven 6’s! 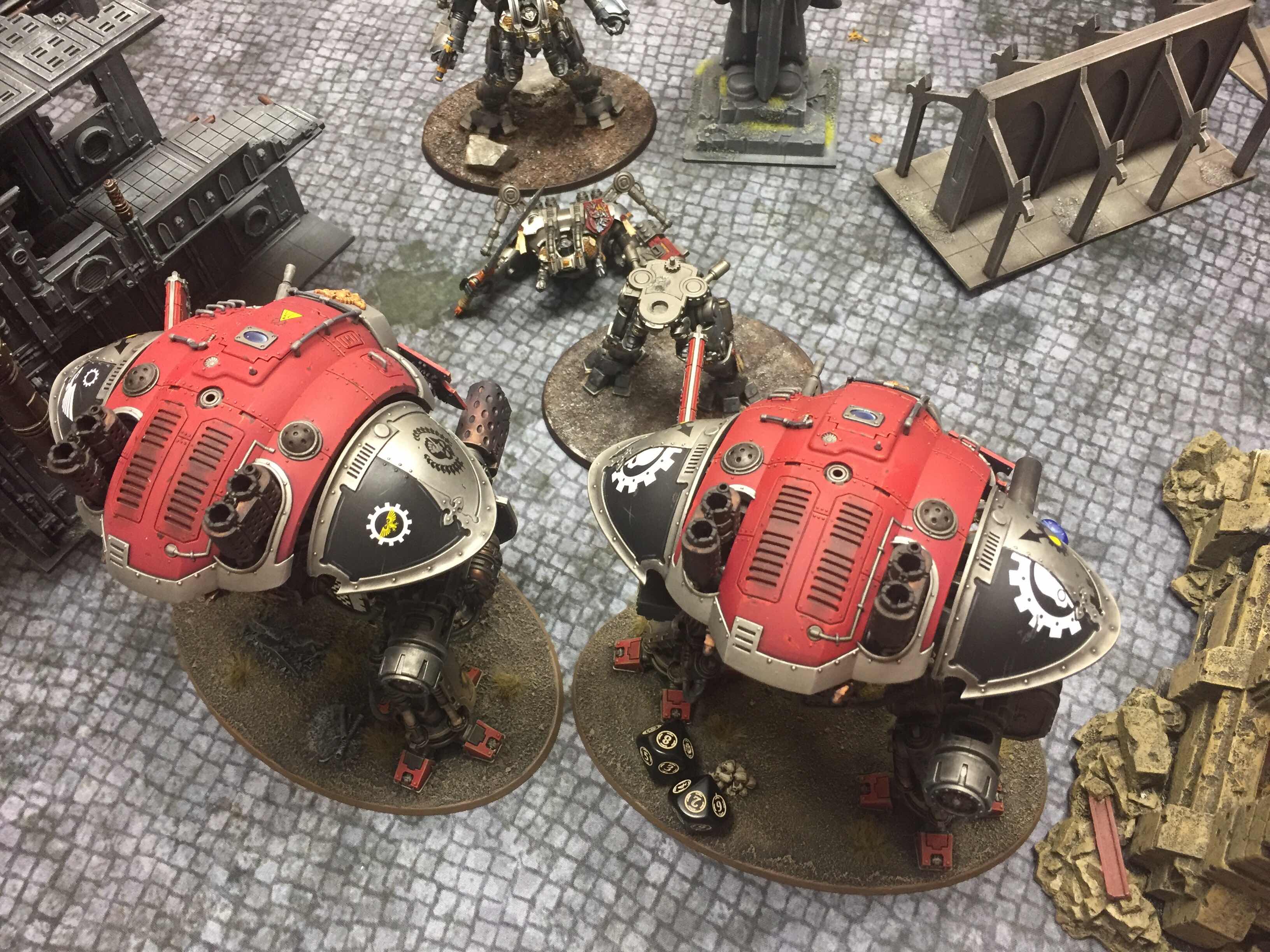 The Imperial Knights and Dreadknights then ran to the centre of the table and started to duke it out in a vicious melee... but on the way one of the Imperial Knights was slaughtered by a flurry of hard-hitting psychic powers and focussed laser beams from the enemy Land Raider. 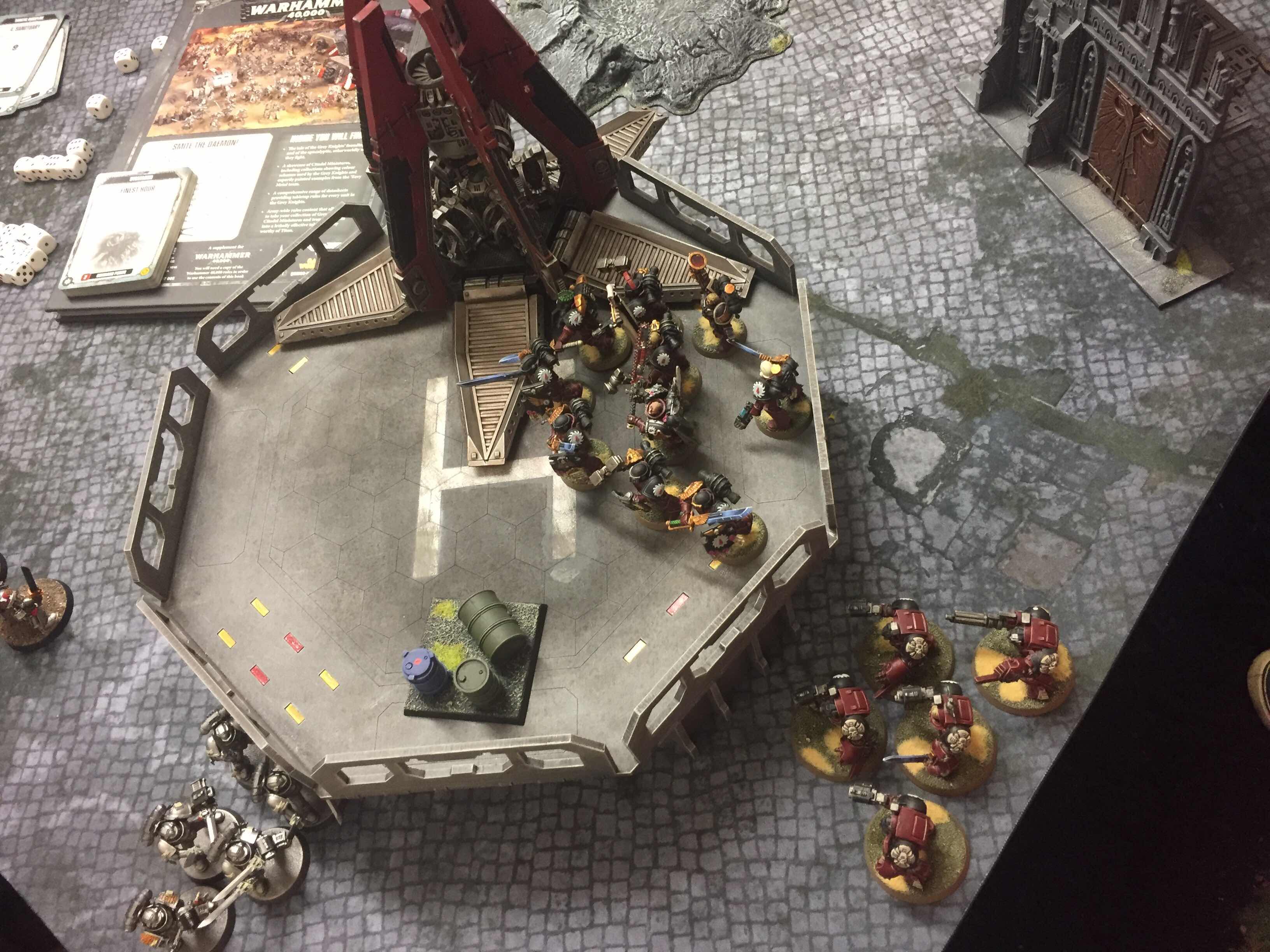 Towards the later stages of the game a concentrated strike force of my Flesh Tearers deployed via drop pod and teleporters to start seizing objectives in the Grey Knights’ deployment zone; specifically focussing on the far left flank. 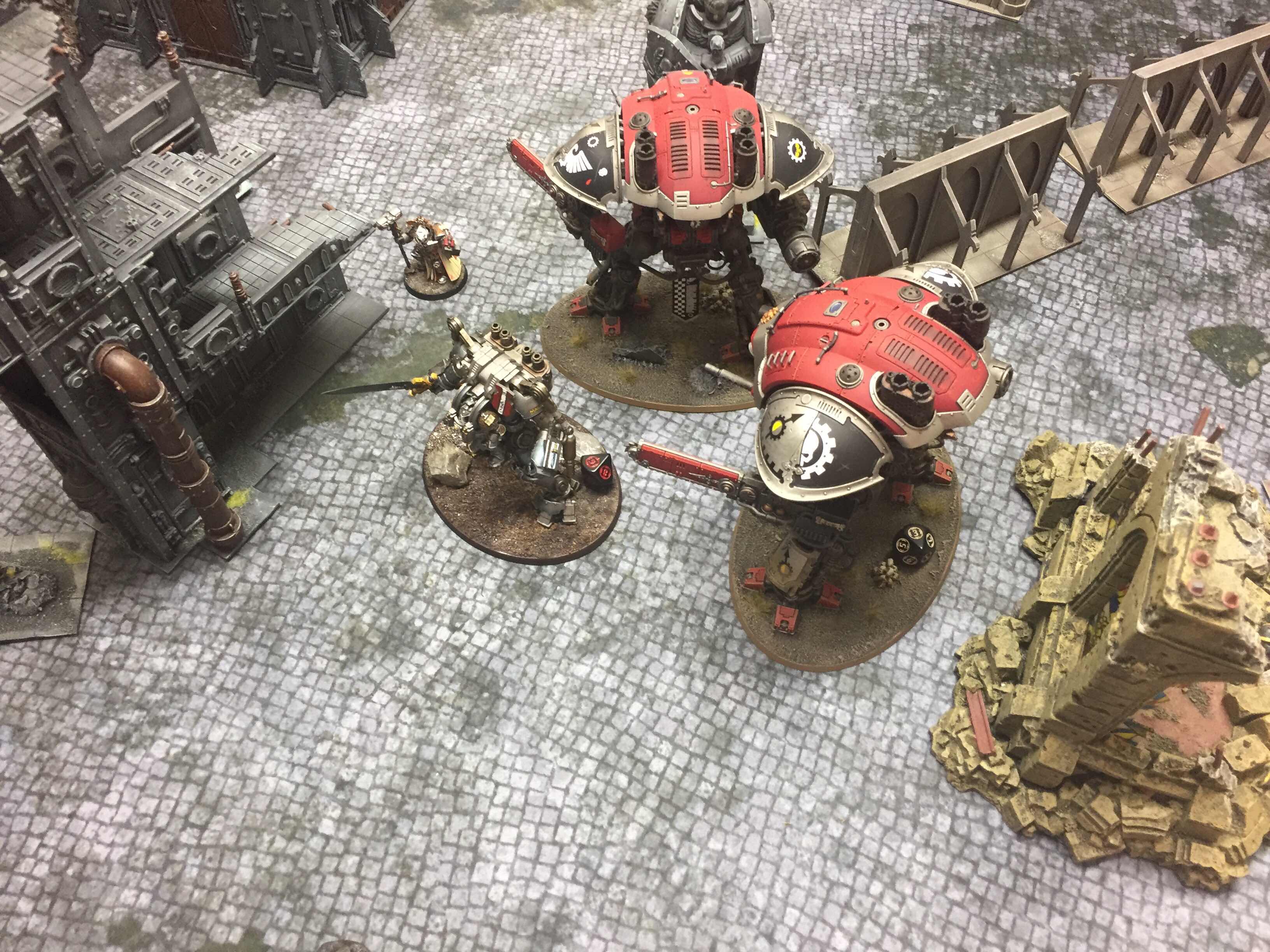 Meanwhile the remaining Dreadknight did its best to hold out against the two mini-titans and was subsequently joined by a number of Grey Knights Characters whose goal was to support their walker-mounted brother.... 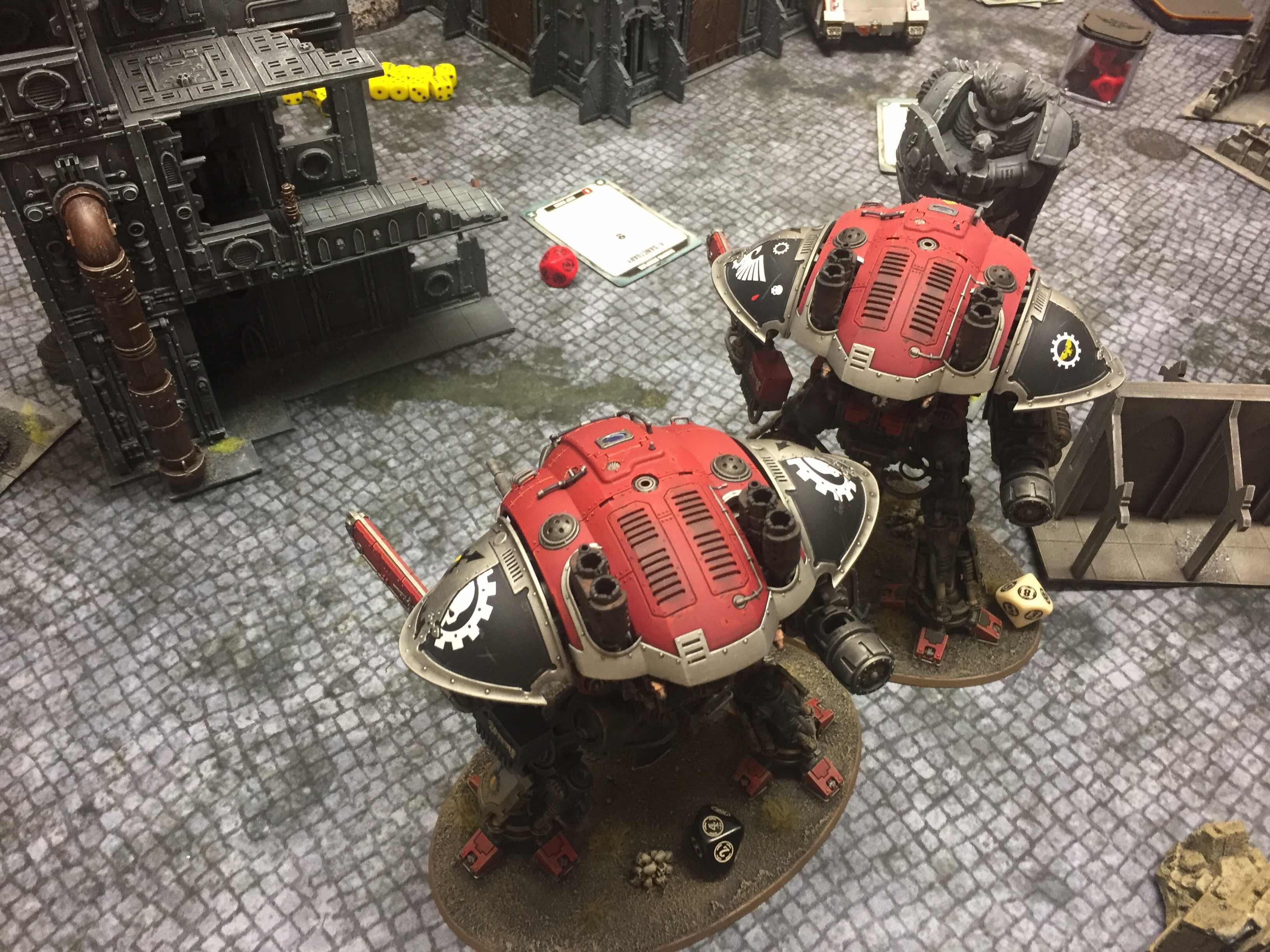 ....However their silver ceramite proves no defence against the mighty weapons of the super heavy walkers who proceed to slay them all in short order. 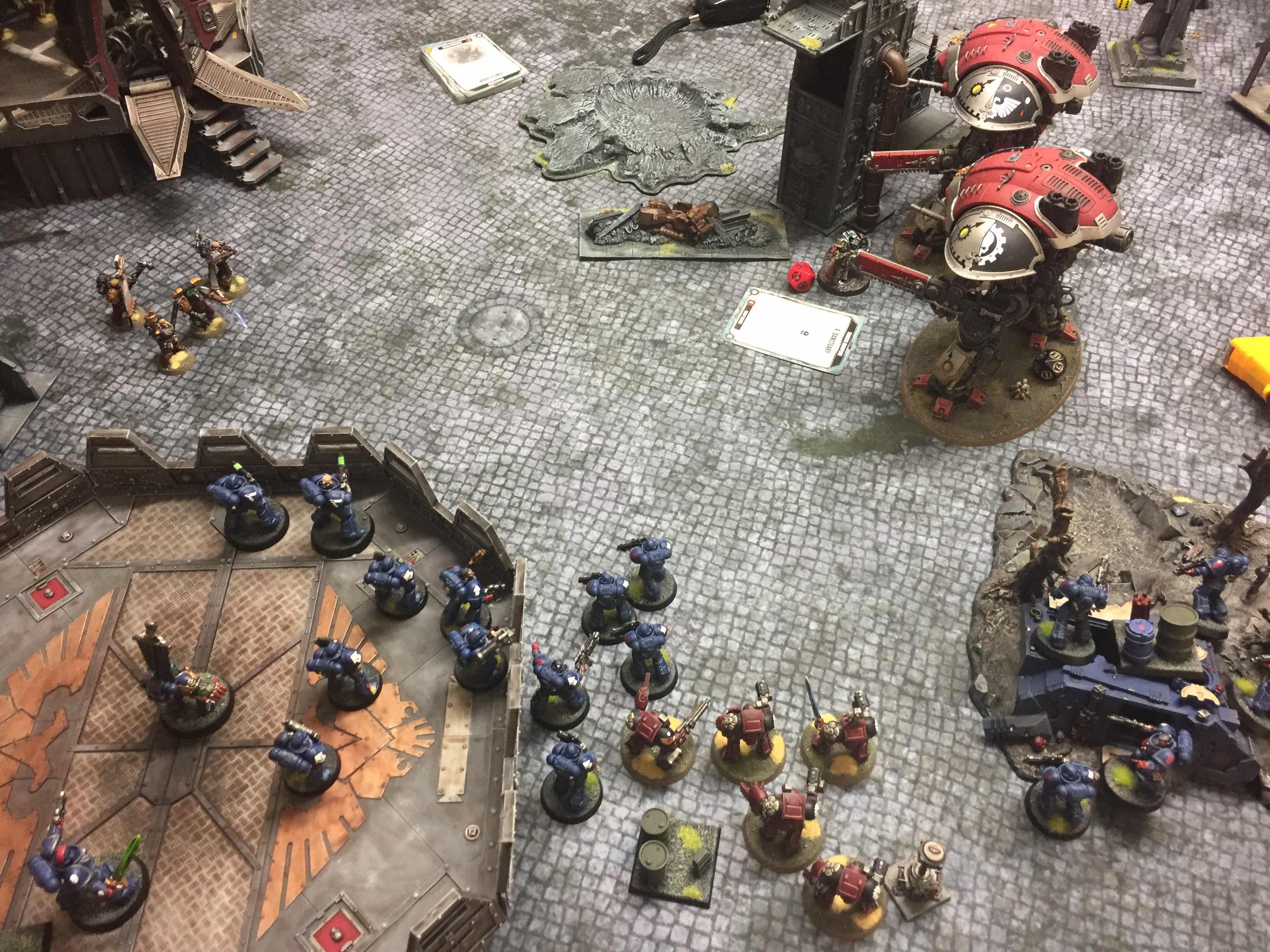 With the flanks secured my entire force starts to round up on Kaldor Draigo.

This geezer is a one man army by himself ... but can he stand against the combined might of two space marine chapters and a knightly household? 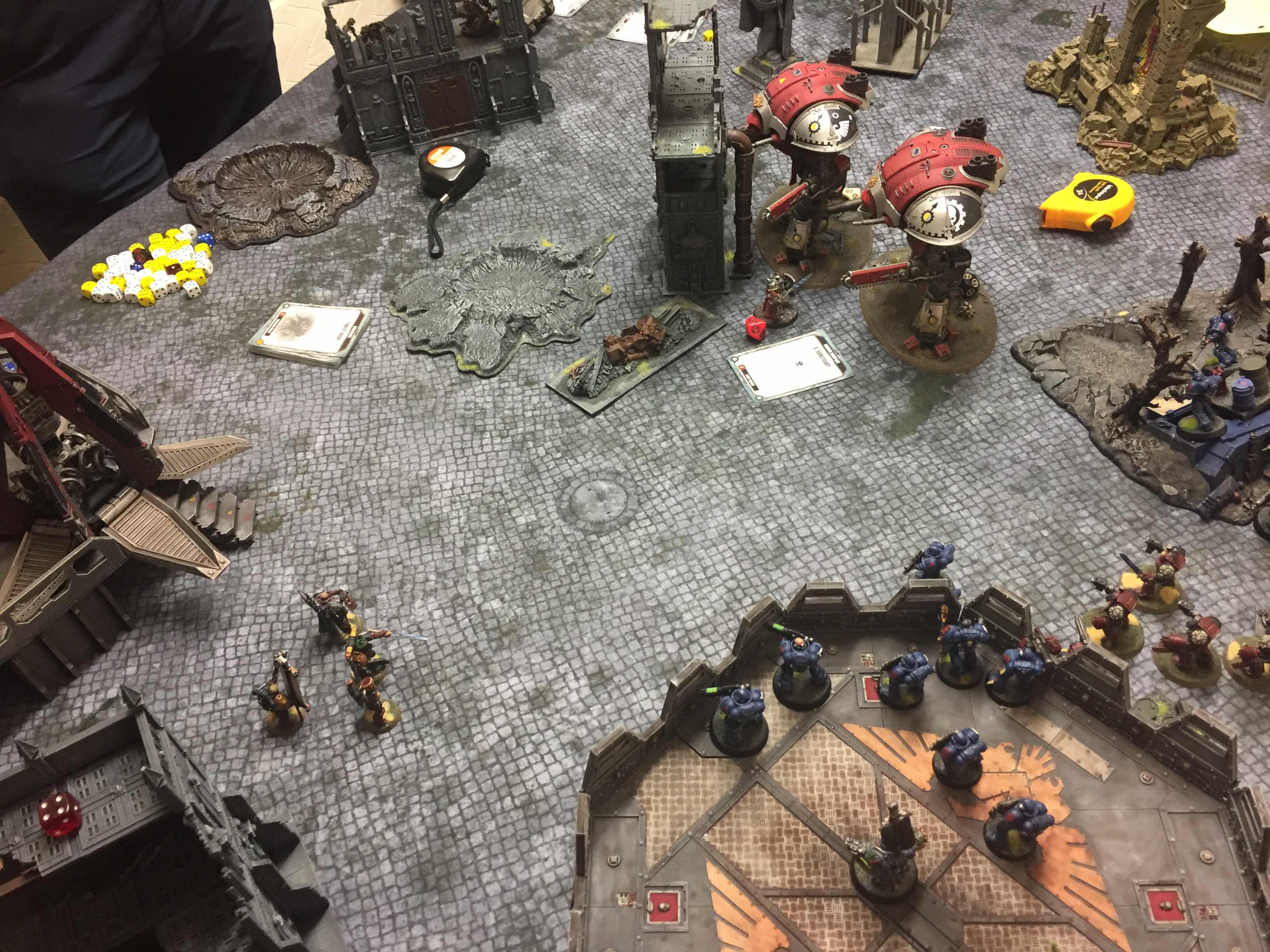 After a concentrated volley of fire from the entire force he is amazingly still standing and so is subsequently charged by the two super-heavies... 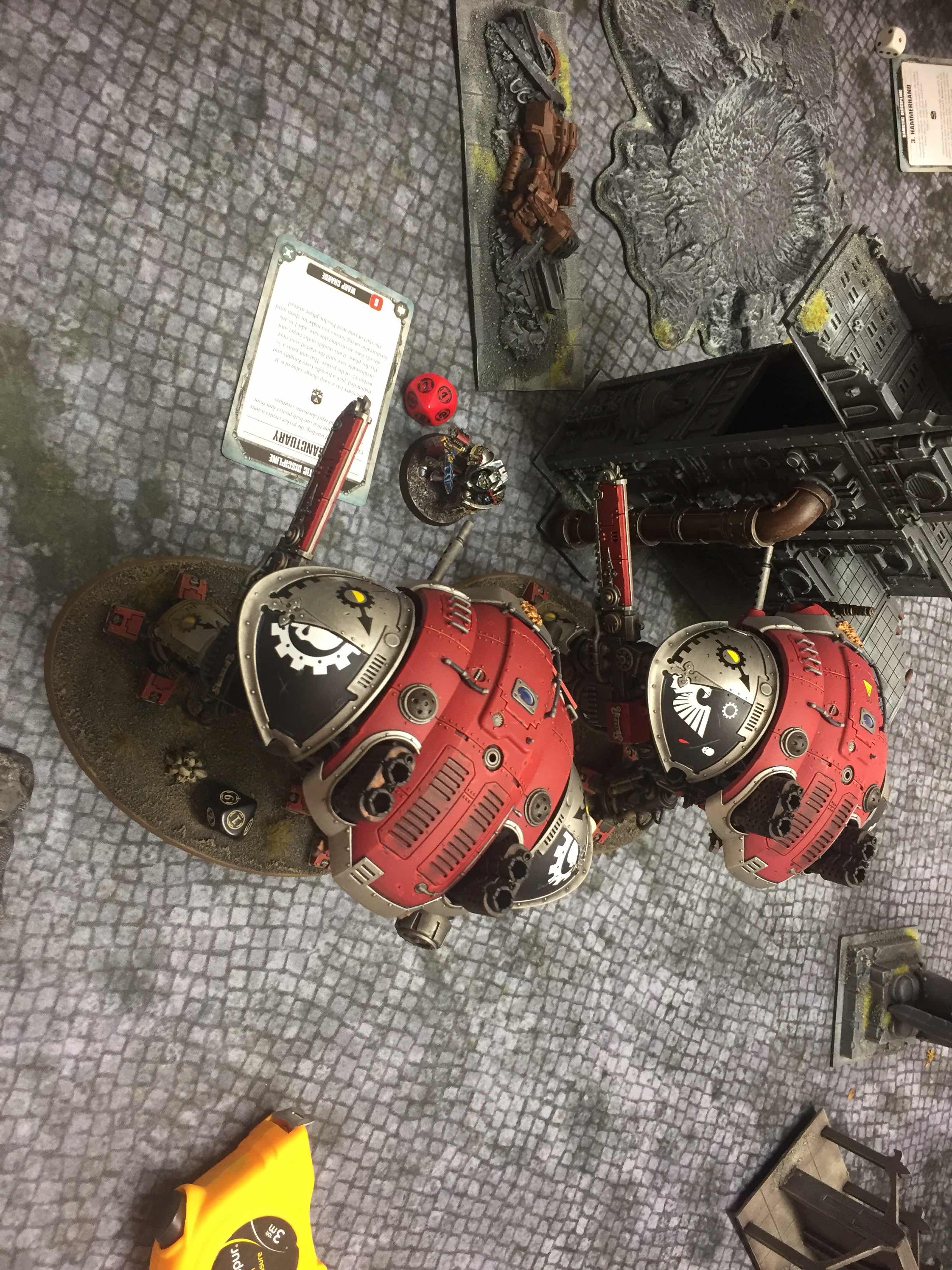 Who proceed to kick him to death with their oversized feet!! Hoooorah (I really hate that bloke!)

With Draigo now dead on the floor all there remained was for us to count up the Victory Points...

So overall the outcome was a fairly strong victory for my combined-arms force. The results are a little misleading as to be fair the game could easily have gone either way at numerous points throughout the battle.

That being said I am really pleased that the combined-arms force selection worked so well. Being slightly OCD in the way I do things I normally restrict myself to drawing units from only one of my forces; however after this battle I’ll probably embrace using an army that is drawn from multiple factions in the future.

Overall this was another great game of eighth edition 40k... I can’t wait for my next battle!

Posted by LegioCustodes at 15:29