Well after the initial battle in my Rogue Trader Campaign a couple of weeks back it was clear that Inquisitor Athena would need to get back into action quickly if she was to have any hope of curtailing the insidious threat of Genestealer infestation on the Imperial World.

After the last game I gave my girlfriend (who has been commanding the Inquisitorial Forces) a number of options as to what the Inquisitor wanted to do next in relation to the Genestealer menace. After much deliberation she chose to move to an isolated Battle Sister's preceptory on the planet's northern most land mass in the hope of acquiring some bolter wielding, power armour wearing allies. With this information I scuttled off to prepare the following players brief for her to set the tone of the encounter to come:

Inquisitor Athena and the Loganite Rebellion: Episode Two – The Preceptory of Salvation

Following her recent success against the nascent Genestealer cult operating on the world of Logan’s Bluff Inquisitor Athena has decided that she is now in dire need of additional allies and troops if she is to have any hope of thwarting this insidious alien menace. She has discounted a number of potential sources for this resource uplift due to concerns around possible corruption or logistical considerations which preclude them.

Finally a viable solution has presented itself in the form of a small outpost of Adepta Sororitas Battle Sisters that lead a reclusive life of prayer and training to the north of the planet’s primary continent. These warrior-sisters are amongst the Imperium’s finest soldiery, second only to the mighty Space Marines of the Adeptus Astartes in combat potency and will make a substantial addition to Athena’s loyalist forces.

With her plan decided the Inquistor orders her crew to prepare her landing shuttle and have her Storm Troopers assemble for imminent deployment to the Sister’s preceptory.

The Inquisitor knows she has to move quickly if she is to successfully neuter the expansion of the ‘Children of the Star God’ in time to prevent them reaching a critical mass whereupon the insidious organisation will become all but unstoppable. If this point is reached then there will be no alternative other than sanctioning Exterminatus, the total annihilation of every living organism on the surface of the world. As her shuttle speeds towards the Sister’s priory the shuttle’s vox-net stutters to life, after a few moments the signal resolves itself and the details of the message become clearer.
Athena leans in to listen to the message as it is broadcast from the shuttle’s transmitter array; ‘Calling all Imperial Forces; this is Sister Superior Isabella Schwazengger of the Adepta Sororitas. Our preceptory-outpost is under sustained assault from unknown heretic forces, the majority of our warriors are deployed elsewhere and we are at minimum staffing levels, we require immediate reinforcement at our location. I repeat we need urgent reinforcement…Ave Imperator!’
‘Damn!’ The Inquisitor hits the wall with her fist as she realises that the Genestealer filth must also have recognised that the Sororitas enclave pose the biggest threat to their nefarious schemes. ‘Damn, damn, damn.’ Her gauntleted fist pounds the wall to emphasise each curse; the nearby Storm Troopers remain seated and looking directly forward, not wishing to draw the ire of their mistress. Athena grabs ahold of the ceiling mounted hand rail and pulls herself towards the shuttle’s cockpit, when she gets there she taps the pilot on the shoulder.
‘Pilot, listen to me…the situation has changed, we’re going in hot; I need you to get us there as fast as possible. As soon as we are on approach you need to adopt combat drop formation, get us down and then pull out until you read my extraction signal. Do you understand?’

The pilot nods, his fingers already actioning the Inquisitor’s commands, ‘Yes ma’am, Roger that.’ Athena spins on her heel and moves back into the troop hold, she unclasps the leather holster of her plasma pistol and draws the weapon, her thump flicking its activation rune in one swift motion. As the magnetic coils begin to glow with a luminous blue radiance she shouts to be heard above the engine noise, ‘Troops, you heard that last transmission from the ground, it looks like the enemy are going to be there waiting for us. This liaison mission has now become a rescue operation, we need to get down there and ensure that the warriors of the Sororitas survive this encounter intact. Show no mercy, let’s go.’ 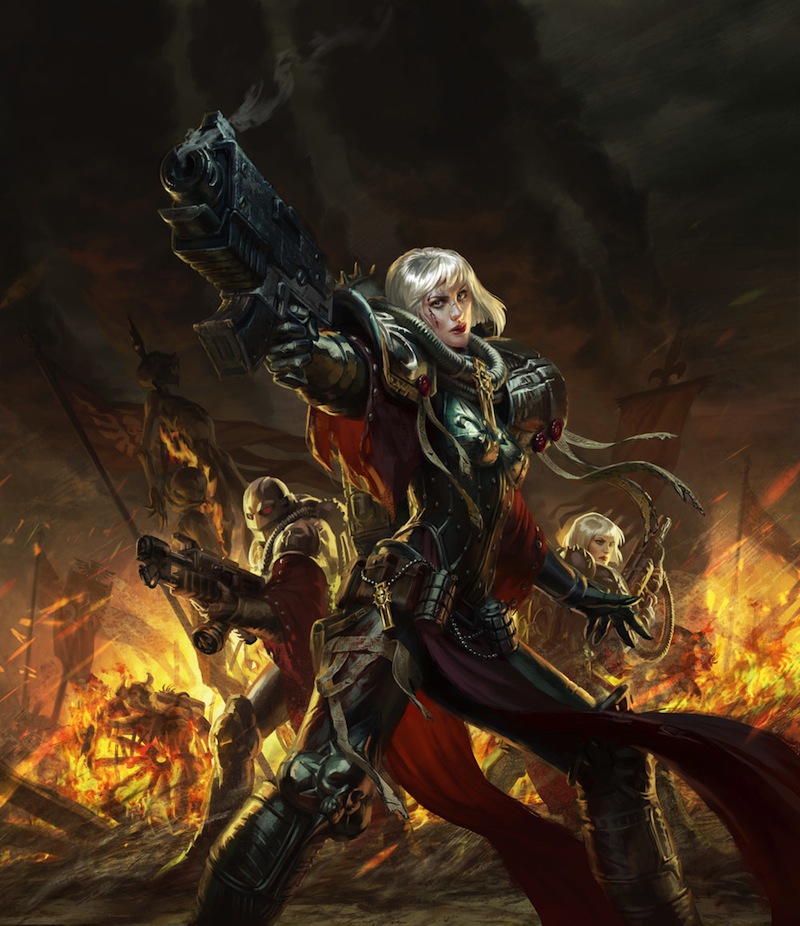 Upon hitting the ground Athena is met by a scene of utter chaos, the entire area is lit up by the deep red of focussed laser shots whilst the continuous staccato of boltguns drowns out all other noise. It is apparent that the Battle Sisters are already under fire and in dire need of support; her troops move swiftly out of the transport shuttle and adopt combat formations; years of training and indoctrination allowing them to navigate the battlespace without hindrance.

The Inquisitor’s plan is simple, she needs to link up with the surviving Battle Sisters and then utilise their combined combat power to drive back and eliminate the cultist forces.

The preceptory is the main base for the Battle-Sisters on the planet; as such some combat supplies are littered around the battlefield. If the Imperials can raid these (by moving within 1 inch) they might be able to salvage some extra kit to aid their mission.

These consist of Inquisitor Athena, Sister Superior Schwazenegger supported by their respective Storm Trooper and Battle Sister squads. Profiles are as follows:

Carapace Armour is a highly protective suit of interlinked ablative plates designed to provide protection from both solid and energy based weapons. It offers a basic saving throw of a 4, 5 or 6 on a D6. However this type of armour is fairly cumbersome and as such the wearer incurs a half inch movement penalty (shown on profile).

Powered Armour Power armour consists of an all-enclosing protective suit, life-support system and many technically advanced features. The natural weight and cumbersomeness of the armour is overcome by a system of electrically-motivated fibre bundles which replicate in every way the muscular movements of the wearer. So, although heavy, the wearer is free to move without penalty. Autosenses and communicator are included together with respirators which enable the suit to be used in any atmosphere or hard vacuum. Controls are minimal; most of the suit functions are automatic. The upgraded variant used by the battle sisters here gives an armour save of 3, 4, 5 or 6 on a D6 with no movement penalty.

Lasgun: Lasguns are fairly low-powered weapons but they are popular with all military forces because they are easy to maintain and cheap to manufacture.

Laspistol: These are short compact pistols that utilise the same type of technology found within the ubiquitous lasgun. Whilst not overly-powerful compared to other weapons of their size these weapons are cheap and readily available on all but the most backward planets.

Bolt Gun: The bolt gun or bolter fires small bolts which are loaded with armour piercing explosive tips. They are popular with pirates and criminals as they make a loud and suitably satisfying noise.  Given their added stopping power they are also the standard armament of most Space Marines.

Bolt Pistol: These are smaller more compact versions of the bolt pistol and find favour among the same sort of characters, an opponent carrying one of these means business!

Plasma Pistol: This is a pistol version of the larger plasma gun.  Like its larger counterpart the weapon uses vast amounts of energy and needs to be recharged for one turn after it is used. Once fired it cannot be used until the firer’s turn after next.

Power Axe/Maul: These weapons represent a large axe or maul and have a massive amount of energy vibrating through them at high frequency allowing it to negate even the heaviest armour.

Flamer: The flamer fires a burst of super-heated chemical which sticks to the target and burns it up.

Dispositions:
At the start of the game Inquisitor Athena and her troops have just entered the battlefield from the far side of the preceptory’s grounds whilst the Sisters of Battle are hunkered down in the strong point that is their chapel; cultist forces are littered across the battlefield and scanner readings indicate that more enemy troops are en route to your location. You will need to act swiftly and decisively in order to ensure victory.

Objectives:
Your objectives are as follows:

Your Primary Objective is to save as many of the Sororitas forces within the preceptory as possible whilst also preserving the lives of your own Storm Trooper retinue. Remember the more soldiers that survive this engagement the more warriors that will be available for future deployments. The Emperor Protects!

The secondary objective is to exterminate as many of the genesetealer filth as possible.
Posted by LegioCustodes at 19:13