It's been months in the preparation...countless hours have been spent churning out legions of toy soldiers in anticipation of blood shed on an epic scale... 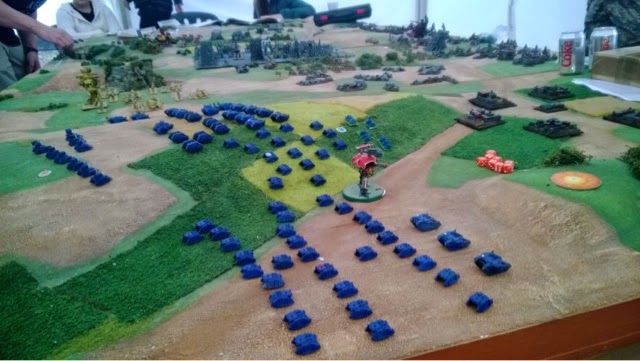 And finally it has now been and gone with hordes of Oldhammer hobbyists descending on the Wargames Foundry in their new shop near Newark for this year's 'BRING OUT YOUR LEAD - OLDHAMMER DAY 2014!'

And what a day (well weekend actually) it was!  The venue was great and the Ansells and all the staff from the Foundry went out of their way to make us all feel welcome from the moment we arrived on site!  All visitors were given a free event miniature (a rather cool looking Jester-Goblin) and a free event button badge which was very nice and greatly appreciated. Additionally there was free tea and coffee available all day as well as reasonably priced snacks and beers which we consumed with gusto!

On arrival we took the chance to peruse the large venue, looking at the fantastic and extensive selection of miniatures on sale; they were great (and well priced), my mate was so taken with them that he stocked up on a few classic Judge Dredd figures that he's planning as using as an arbites force in future games of 40k.

We also took the opportunity to look at the beautiful miniatures that were doing battle on the various tables around the site...now I have never been taken with fantasy myself, I've always been a SF man, but I have got to say that the huge Warhammer Siege game that was taking place in the outside marquee was a thing of sheer beauty and my jaw literally dropped upon seeing such wonderful old figures doing battle on such a monumental scale! However I did notice that in 36 hours of gaming each unit had only managed to move a total of about 8 inches...but when models look that bloody good who cares.

After a while my fellows and I decided to undertake some gaming of our own and cracked out the Epic Space Marine 6mm forces that we had prepared for the event. We then spent the rest of Saturday running through a few small games of Epic in order to familiarise ourselves with the rules in preparation for Sunday's planned huge game. It was good fun and drew a lot of attention from other attendees (6mm is always a bit of a niche I find...but if everyone is honest with themselves it's an itch they've always wanted to scratch). My dedicated girlfriend played with my Marines and took great delight in slaughtering swathes of poor infantry with her tanks...Awesome.

As Saturday drew to a close our group headed off to Newark for a curry and a few beers to discuss our battles and refine tactics, before returning to the Travel Lodge for the night.

Sunday started early and we arrived back at the Foundry at 0900 hours to set up the massive 40000 point (how appropriate) Epic Game. The players taking part were Chico; Curtis; Thantsants and his mate Ollie and me and my mates. None of us had met before (though we had spoken on the forums/blogs extensively) so it was nice to put names to faces and we all hit it off pretty quickly. I would like to say that these guys were all true gents and it was a pleasure to play with them.

Needless to say it took a while for us to set up the field and by the end of it there were hordes of troops all over the place; with the majority of our warriors focussing on capturing a wrecked Titan Factory located in the middle of the table. There was also a separate secondary objective for my Marines on the left flank to rescue a stranded Imperial Ammo Convoy which could then be used to resupply Thantsants extensive Artillery line which added an extra element of strategy and fun.... 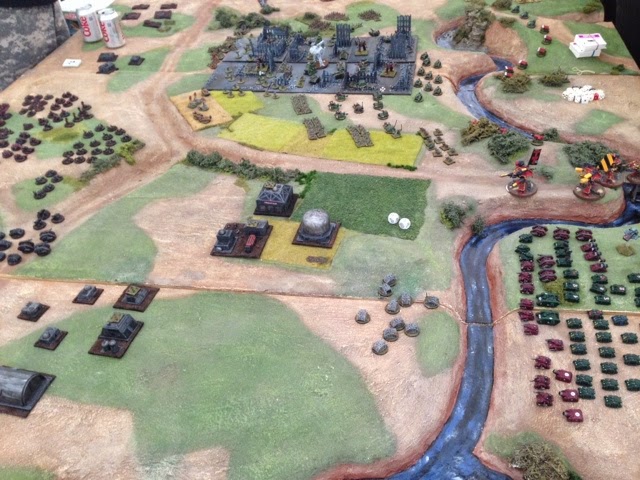 Above is the Imperial left flank and centre of the table...my combined Flesh Tearers; Dark Angels and Imperial Titans are rolling onto the table, with the stranded ammo convoy just in front of the river. Thantsants Imperial Forces are in the centre of our line and directly opposite us are Chico and Curtis's Orks. 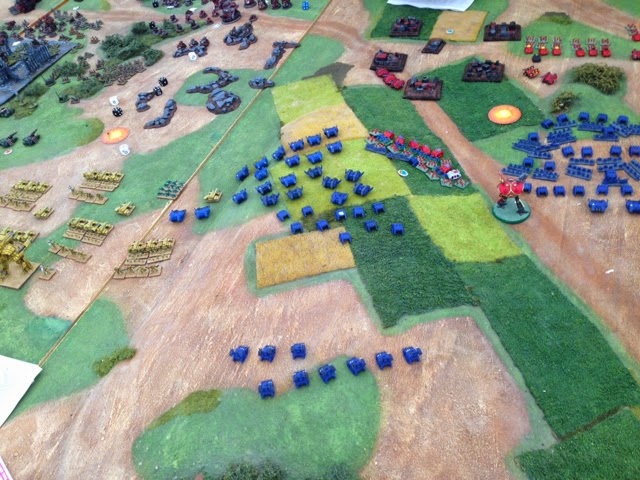 Meanwhile on the other flank Ollie's Tau (counting as Eldar) and Ian's Ultramarines engage the Orks and Colin's Renegade Space Marines! 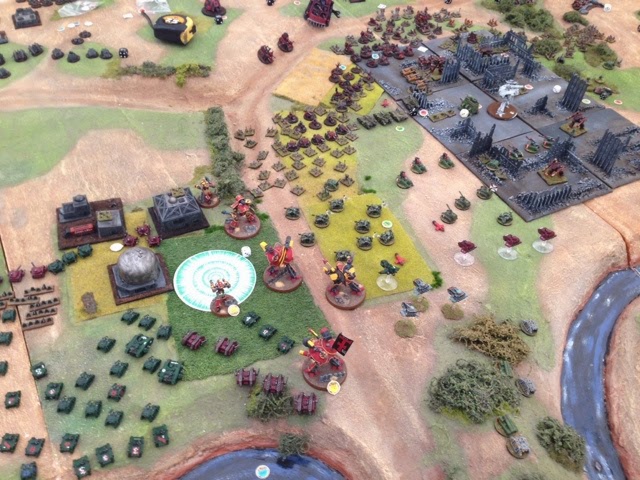 The game was great fun with massed tank battles; hordes of rough riders and Titan-on-Gargant Action all over the place whilst strafing Squadrons of Thunderhawk's sped across the battlefield laden with units of highly trained Space Marines eager to butcher greenskins. 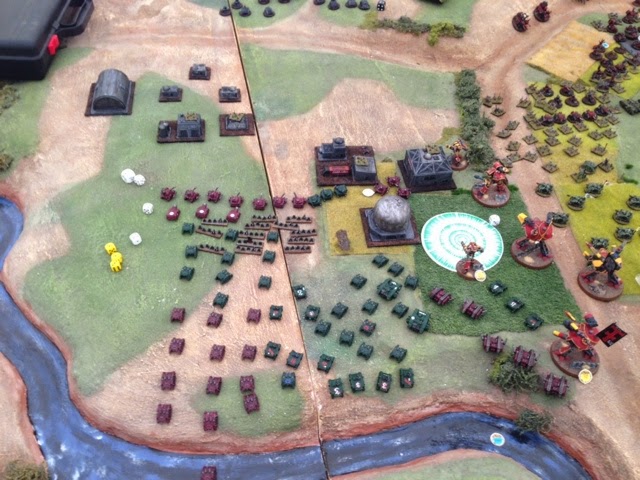 Due to the phases/initiative model that is used in second edition Epic's rules things were a tad slow at first with a bit of waiting for some parties while their counterparts finished their actions. However we overcame this small issue by eventually taking a somewhat looser interpretation of the rules and phases in order to increase the fluidity of game play.

There was a refreshing l'assez faire attitude to rules interpretation with additional extras being picked out from Space Marine Battles; Titan Legions and other publications as we saw fit, this casual gaming appeals to me and as Chico was keen to point out 'Who cares; we're here to have fun ... (now please let me go for a nicotine break!)' Compare this to the tournament-style 'win at all costs' gaming attitudes that now seem to permeate mainstream GW... Quite a difference! 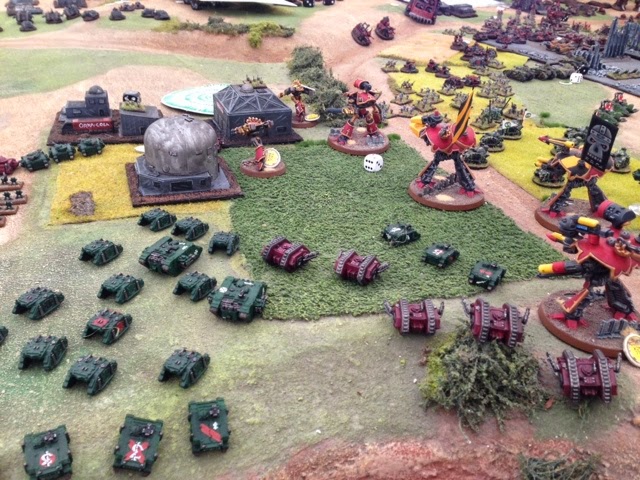 We didn't get through as many turns as we would have liked, but those we did complete were excellent fun...with numerous 'guest rollers' turning up to cast dice on our behalf and the carnage was intense with hundreds of troops and vehicles being cut down with each volley of fire whilst pulsa rokkits ripped legs and weapons off Titans with aplomb!! 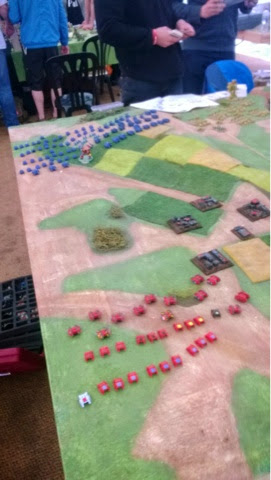 Overall the whole event was a great time and I thoroughly enjoyed myself (a highlight was seeing Warlord Paul in his very original 'Warlord Paul' T-Shirt) and it was great to be in the company of so many like-minded gamers!

Sadly I had to pull out of Sunday afternoon's Confrontation game that had been organised by the dedicated Assless man due to a change in transport arrangements which was a real shame as I have wanted to try these rules out for the last twenty five years...I guess I'll have to wait a little longer now! I want to use this opportunity to apologise to my French counterpart here as he had taken a lot of effort to jack up what was sure to be a fantastic game and I am sure it was great fun (I hope Space Roger managed to get his man)!

Anyway that's it from me; I'm off to read everyone else's blogs about the event and gawp at the pictures, I'll see you all at Oldhammer 2015!
Posted by LegioCustodes at 14:10