Despite being forced to work the weekend and thus missing out on BOYL 19 and the second edition 40k tournament I had organised I still managed to churn out three models this week. 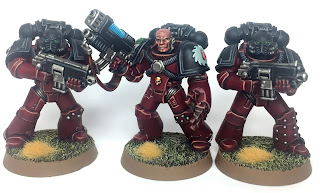 I’ve done two tactical marines and a tactical sergeant for my slowly growing Flesh Tearers army.  These guys will initially find themselves taking part in games of Kill Team before graduating onto the full 40k (and maybe Apocalypse) battlefields of the Dark Millenium. 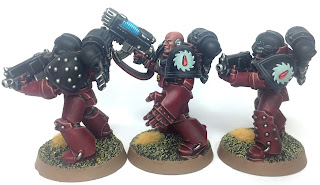 Keeping in line with my pre-existing theme of the army only wearing older suits of power armour I made these chaps from the MK IV Maximus Armour (Horus Heresy) box... with a few additions to spice them up a bit! 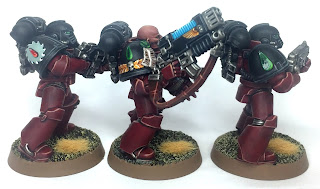 Overall I’m really pleased with these guys and I have to admit that for a two-colour paint scheme they were still relatively quick to paint.

I’ll probably do a few more this week and try to push them to a full tactical squad... I’m really enjoying the Plasma!!

Posted by LegioCustodes at 23:14