As it was nearing the festive season my mates and I decided that the best way to celebrate this homely time of year was with vicious butchery on a massive scale, namely in the form of a game of 40k apocalypse! Now these games are an epic experience but they do take a lot of time and effort to put together...and as such this was our first Apocalypse game since 2008! Firstly we had to make sure we were all off work at the same time and so leave had to be booked and rest days swapped...next we needed a venue that could accommodate a twelve foot by six foot battle field.... 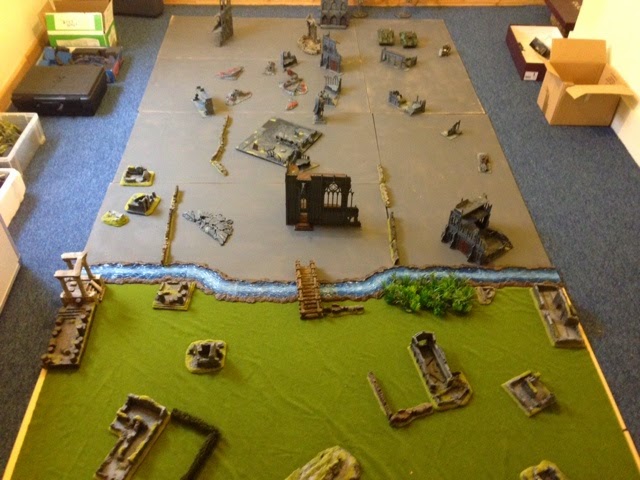 Luckily one member of the group was able to acquire access to a disused basement room in a relatives house which we were quick to exploit and transform into a blasted area on the outskirts of an Imperial city where the dull grey of urban industry turned to the rich green of farmland.

Set up took two hours along with the finalisation of army lists and quick battlefield repairs for troops who had suffered damage in transit (the little bastards are so fragile)! However eventually the forces were deployed and the game was ready to start! 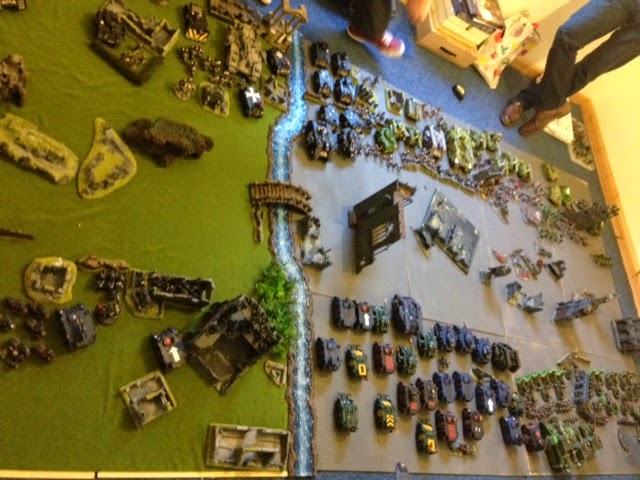 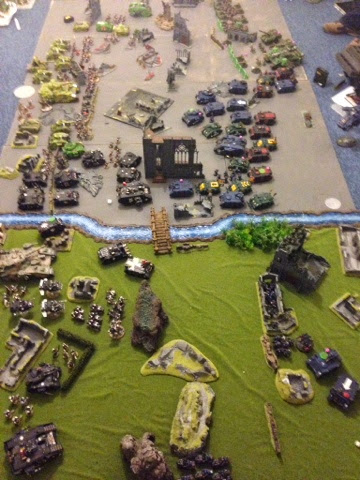 In terms of armour there were over seventy tanks on the table including three super heavies supported by multiple wings of flyers! 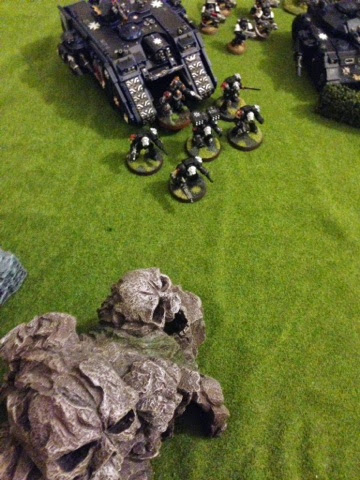 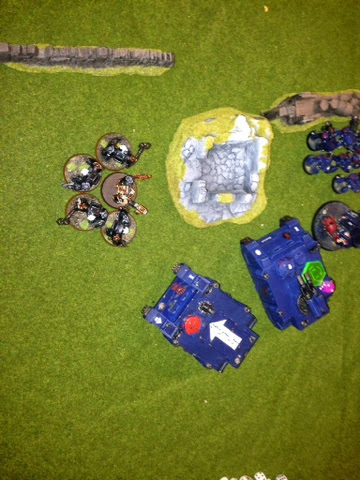 Overall there was roughly thirty thousand points deployed on the table which whilst an impressive sight it did unfortunately take an epoch to move, shoot and fight with! 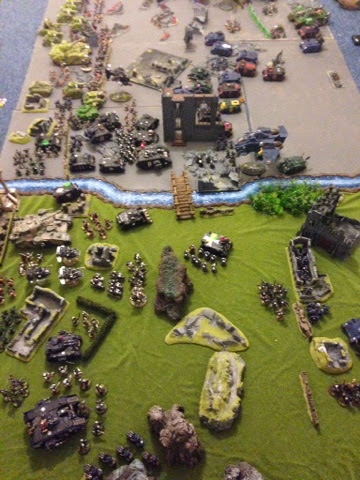 This became especially pronounced when the battle lines closed and massed waves of troops started deploying from their transport vehicles... 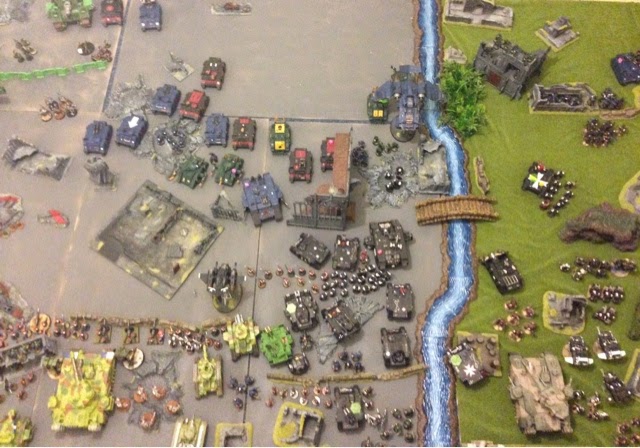 and deep striking into the enemy's table quarter. As such we only managed to play to the end of turn two but it was still great fun and absolute carnage. 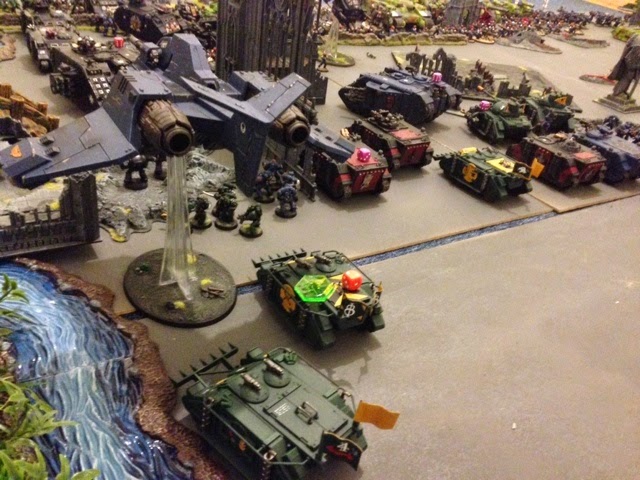 In the first turn my opposition seemed to have the game in the bag (aided no end by winning the roll off to go first) when they unleashed the massed fire of squadrons of imperial guard tanks, super heavies and Space Marine Devastators. However in turn two things took a turn for the worst when seven squads of my terminators; four squads of assault marines and two squads of seraphim thundered into their rear lines by deep strike whilst two squads of scouts crept around the flank. 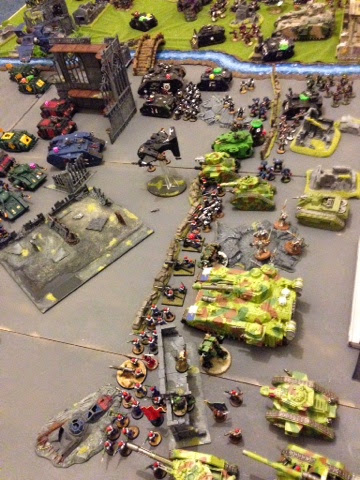 The enemy tried to regain the initiative by deploying High Marshall Helbrecht and Kaldor Draigo into our Imperial Guard's rearward lines by drop pod, but this quickly back fired as thirty lascannons and four autocannons blasted them to a fine red paste on the floor. 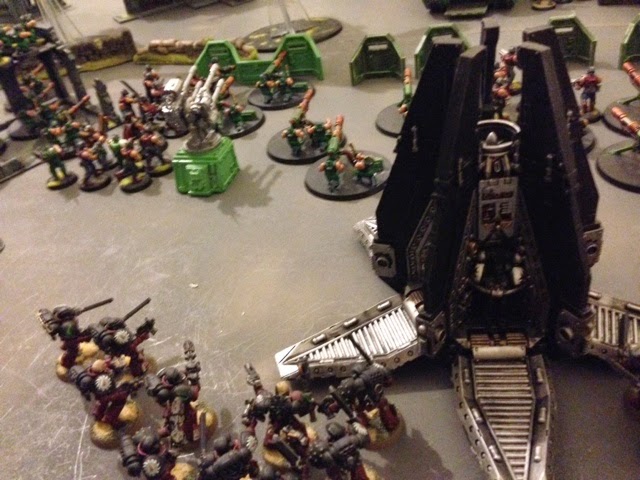 The guard were also supported abley by the timely arrival of my Flesh Tearers from reserve: Gabriel Seth's murderers are vicious bastards and are brutal in combat with....well anyone. 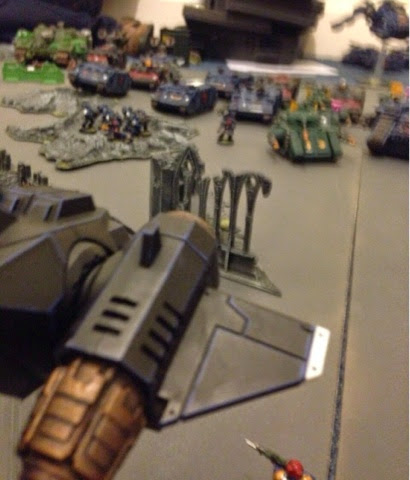 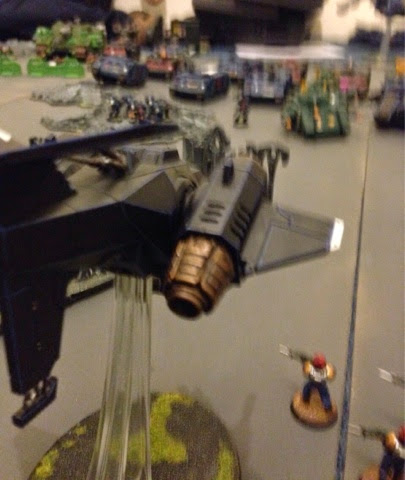 The flyers were also great fun this game; whizzing around the skies gunning troops and vehicles down with almost absolute impunity. 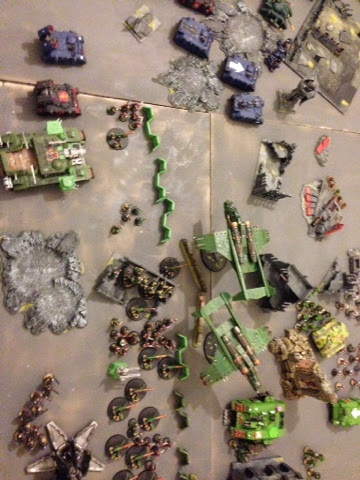 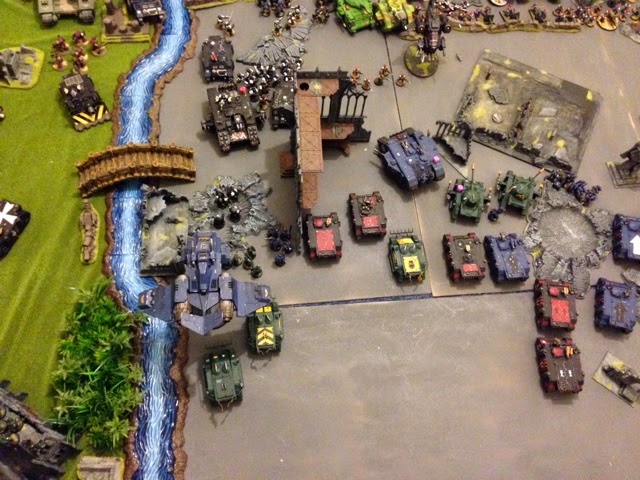 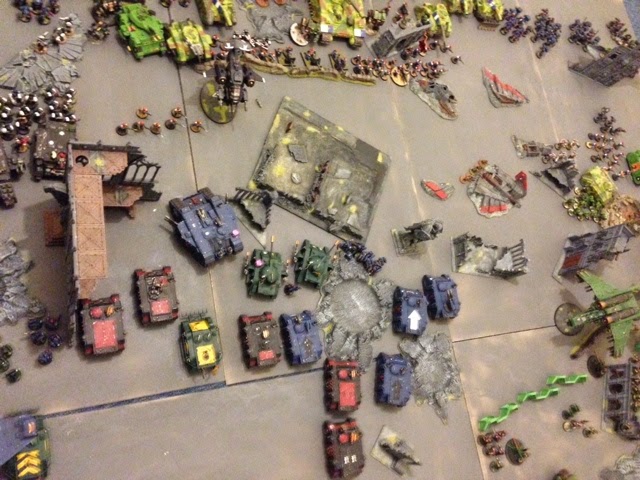 Overall this was a great game and we all really had a laugh (sixteen hours of constant playing - finishing after midnight!), templates the size of dinner plates and platoons of troops destroyed with one shot is pretty impressive stuff. I thoroughly recommend a game of Apocalypse...if only to get every one of your models on the table at once!!

However I have learned some tips from this experience - these are as follows:

1) set up the battle field the night before if you can...this will save time...lots of time on the day.
2) ensure players create army lists and crib cards for their armies well in advance in order to limit reference to 30 books and an iPad during game play.
3) have snacks/lunch on hand before the first dice is rolled
4) set a rigid start time; and if players are late (you know who I mean, Colin) then they have to have their favourite model set on fire!

These small tips should keep the game on track and eliminate problems before they arise!!

Merry Xmas one and all... I hope Santa brings you lots of lead/plastic!!