Apologies for the time gap since my last post! Unfortunately I have been remarkably busy with work recently and so I haven't been able to get online to blog, however I have managed to squeeze in a bit of painting time here and there.

As regular readers of my Blog will already know, my girlfriend is not only supportive of my hobby interests but has also become a keen participant and frequently takes to the battlefield to command troops against me in games of Rogue Trader.

One set of models that she has fallen in love with is my collection of first edition Space Hulk genestealers which I have been painting on and off for the past few decades (we've all got one of those projects we return to from time-to-time!).

Always keen to please I have put together a scenario for us to play that features the aforementioned genestealers in a bitter struggle to the death with the might of the Imperial Inquisition.  However as I was constructing the scenario's background I quickly realised that a battle against a force consisting of only purestrains could be quite boring and so I decided to augment these insidious xenos with a few genestealer hybrids in order to shake things up a bit. I proceeded to dig around my unpainted lead pile and pulled out some classic old models to paint up. 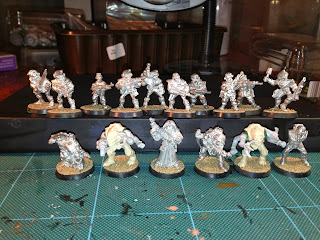 Initially I was a little ambitious with my painting goals and prepared the above models for painting.  Here we have the following: 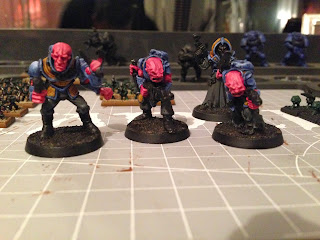 I quickly realised that the sheer number of figures that I had prepped was too ambitious to paint up quickly and so I decided to attack the project piecemeal.  For the first batch I chose the magus and three metal hybrids to complete.

When choosing a colour scheme I decided to paint their body armour and chitin blue in order to tie them in with my traditionally coloured purestrains.  For the fleshy areas I decided to go for a deep, rich pink which would be a perfect medium between the purple/mauve of my pure 'stealers and the human hosts normal flesh tones.  When painting both these colours I decided to go proper old school in my technique and so I started from a darker base colour which was highlighted progressively by simply adding white to the base...I have to say that I'm quite happy with the results (this picture was taken mid way through the project).

I also added some yellow to the armour segments for a little variation and painted the combat trousers/robes a fairly standard grey.

Below are the finished models: 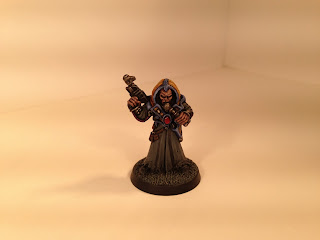 The magus is a fourth generation hybrid and as such is genetically far close to humans than most of the brood, in light of this I gave him a more usual human flesh colouration...albeit with a light purple wash to hint at his alien origins. 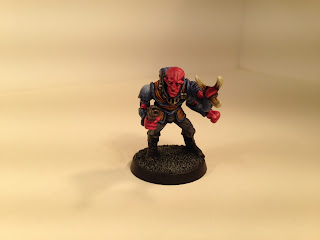 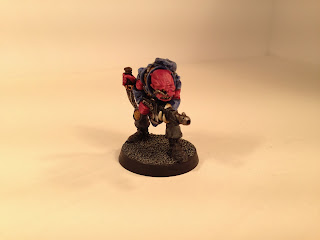 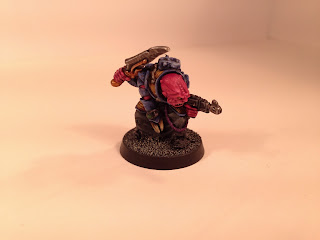 Above are each of the other hybrids in turn...unfortunately the lighting wasn't great when I took the photograph thanks to the onset of bloody winter in the UK.  I envision that these guys are either second or third generation hybrids and as such their flesh colour is far closer to the genestealer norm than the magus. 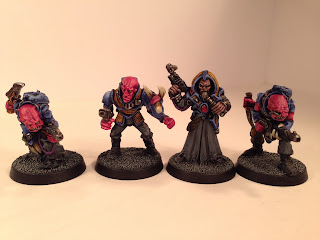 ...And this is all four of my new hybrids together and ready for the upcoming battle.

Now I will need to get working on the brood brothers...or maybe some more hybrids!

Again I apologise for my recent absence from the blog but I hope that you approve of what I've been doing in the meantime!!

Legio
Posted by LegioCustodes at 16:07